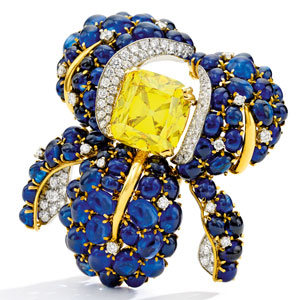 Magnificent Jewels almost feels like an understatement this time around.

Sotheby’s annual preholiday Magnificent Jewels sale in New York City, which takes place on Dec. 10, will offer up a series of gems and jewels so opulent and inherently valuable, they could make a jewelry hound’s eyes tear up—and not just from the refracted light of the hulking gemstones bedazzling them.

All of the auction’s incredible jewels will be put on public view in Sotheby’s York Avenue galleries beginning Dec. 5. But in the meantime, here are four jewels expected to fetch in the multimillions on Dec. 10.

Estimated to sell for between $6 million and $8 million, the Indian Blue ring centers on an exceptional 7.55 ct. fancy deep grayish-blue diamond. The cushion-cut diamond of SI2 clarity is, according to the Gemological Institute of America, “a rarity of nature and product of human ingenuity.” Its display of red phosphorescence reveals the stone’s possible history: “It’s been proven by gemologists that red phosphorescence can occur in diamonds with known origins, specifically from India (the Hope Diamond) and, more recently, from South Africa (the Blue Moon),” according to a statement from Sotheby’s jewelry department.

Made by the New York City–based jewelers Carvin French, this flexible band bracelet features more than 200 diamonds from the soon-to-be-closed Argyle mine, ranging in color from intense pink to red. It’s estimated to sell “in the region of” $3 million.

This modern Verdura brooch is considered to be one of the most important Verdura jewels ever to appear at auction. Designed as an iris, it was commissioned in 1999 and features a round-cornered square brilliant-cut fancy vivid yellow diamond weighing 14.37 cts. with cabochon sapphires and round diamonds set throughout. It’s estimated to sell for between $1.6 million and $2.4 million.

Expected to fetch $1.8 million–$2.8 million, this cushion-cut red diamond ring is valuable because of its extreme rarity. Reds are the rarest and most valuable diamond color, representing approximately 0.01% of the diamonds unearthed historically. Which renders the ring’s 1.38 ct. red diamond one heck of a find.