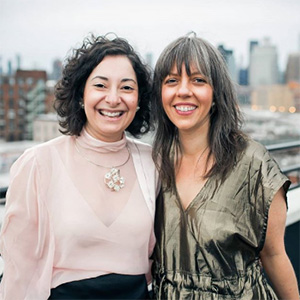 New York City is getting its own Jewelry Week.

Neyman, a longtime jewelry curator, came up with the idea for a Jewelry Week in NYC after years of traveling to jewelry weeks in Europe, including those held in Munich; Athens, Greece; and Barcelona, Spain.

“I recognized that there was a real need for a jewelry week here,” she says. “We have so many jewelers here in New York City, and we wanted to find a way to highlight them.”

“Our whole mission is to engage general public with jewelry in the city,” says Jones. “For us that means [providing] opportunities to do things like visit a great retailer and learn about jewelry history and the manufacturing that’s happening in the city through visits to artist studios and going behind-the-scenes at showrooms and museums.”

She adds, “It’s meant to be an all-inclusive experience. We believe by developing programming that’s educational, it really lays foundation for supporting jewelry in the city.”

The week, which already has 50–60 events programmed, is public-facing, though there will be invitation-only happenings—chiefly due to space restraints and/or security in venues. The organizers, who are actively looking for sponsors for the event, approached studios, institutions, and artists who “have a specific New York story,” says Neyman.

Jones adds that they want to be “very democratic” in their selection process and haven’t turned anyone away who’s been interested in presenting. “If and when people come along and are interested, we’re trying to make it work for them. And we want to be able to grow.”

NYCJW has already built an impressive network of associations with museums, educators, maker spaces, and designers, and the city of New York itself (through NYC Go and the New York City Economic Development Corp.).

Here’s a sampling of the dynamic events planned for NYCJW:

• An exclusive curatorial-led tour of the Metropolitan Museum of Art’s upcoming exhibit, “Jewelry: The Body Transformed.”

• “Fake News and True Love: Fourteen Stories by Robert Baines”: A clever examination of jewelry as a document of popular cultural history at the Museum of Arts and Design. The Museum will host a special talk on American jewelry in conjunction with the exhibition.

• Jewelry panels at the 92​nd​ Street Y Jewelry Center: “Made in New York” moderated by Stellene Volandes, and “Influencers” moderated by Marion Fasel of The Adventurine.

• An exhibition curated by jewelry designer Ariana Boussard-Reifel that illustrates how ethnographic and tribal jewelry have inspired contemporary jewelry collections.