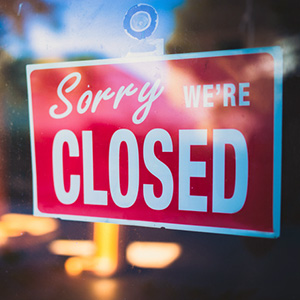 The year 2020 will see a record number of retail closures and bankruptcies, topping 2019, the previous record holder for store closures, according to a new report from retail consultancy BDO.

From January through mid-August of this year, there have been over 9,500 store closures, more than there were for all of 2019, BDO says. Until this year, 2019 stood as the worst year ever for retail closures.

The majority of those closings have taken place in malls, it adds.

The big problem is, of course, the COVID-19 pandemic, which is still not under control six months after it first hit U.S. shores.

However, it also notes that the COVID-19 pandemic “exacerbat[ed] industry changes that were already underway.”

The report noted that the latter half of the year looks “just as uncertain” as the first half, given the slow recovery from the recession, as well as a switch to virtual learning models, which has depressed traditional back-to-school spending.

“With many Americans currently furloughed, unemployed, or fearing for their future state of financial stability, retailers must be prepared for a prolonged period of limited discretionary spending, even heading into the holiday season,” it said. “With significant uncertainty around when a vaccine will be ready for widespread distribution and what a post-pandemic reality looks like, many retailers have a long road to recovery ahead.”

It’s also looking like it will be a record year for retail bankruptcies, with noted names such as J.C. Penney, Brooks Brothers, Neiman Marcus, Lord & Taylor, J. Crew, Loft, Lane Bryant, and Tailored Brands, which owns Men’s Wearhouse and Jos. A. Bank, all taking trips to bankruptcy court.

So far, BDO has charted 29 filings this year—which means this year is on pace to rival 2010, the year following the Great Recession, which resulted in 48 total filings.