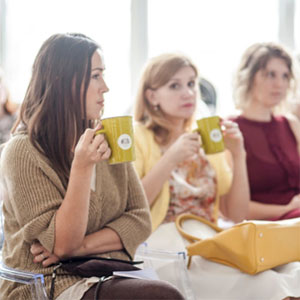 The jewelry industry, like so many others in the age of #MeToo, has recently been facing its demons and institutional shortcomings when it comes to its treatment of women—shortcomings that have allowed occurrences of gender-based discrimination and harassment to go unchecked to some degree.

The damaging New York Times article published last week that chronicled Sterling Jewelry’s alleged history of not promoting or protecting women employees may be, as Sterling told JCK, “based on decades-old allegations.”

But there has yet to be a reckoning. A class-arbitration case against the company remains open and ongoing.

And though strides have certainly been made, the kind of gender-based slights, offenses, and in some cases, crimes, detailed in the story still go on in the broader industry.

The results of the first survey from the Women’s Jewelry Association’s (WJA) Gender Equality Project, released yesterday, underscore the fact that the modern jewelry, gem, and watch industries are struggling to achieve gender parity—and would benefit from training and the institution of clear and concise pathways for addressing and reporting issues of gender-based discrimination and harassment.

The survey was a collaboration between the WJA and MVI Marketing, a trade and consumer research company that works exclusively for the gem, jewelry, and watch industries. It asked 586  jewelry, gem, and watch professionals—which consisted of 240 employees, of which 90 percent were women; and 346 owners, of which two-thirds were women—to comment on workplace practices where gender could be a factor.

Ninety-eight percent of the respondents were from the U.S.  A majority were industry veterans (with 10-plus years under their belts) and a large number were over 50 (69 percent of owners; 42 percent of employees).

Results of the survey, according to a WJA statement, “show overall that employees and owners report widely differing awareness regarding nearly every gender-related workplace topic, indicating the need for education and support for both groups.”

Furthermore, employees are likely to think gender topics “extremely important” more often than employers do, according to the statement. “Exacerbating the problem for employers is that many employees are reluctant to report occurrences of gender discrimination to their bosses because they fear a negative impact on their jobs—or other retaliation.”

A few key findings from the survey:

++ 49 percent of employees report they have witnessed or are aware of gender-based discrimination, versus 7 percent of owners.

++ 30 percent of employees say they are deprived of equal opportunity for advancement due to gender-related issues, but only 2 percent of owners report they have received complaints.

++ 50 percent of employees report being subject to a gender-related hostile work environment (including at trade shows), but only 9 percent of owners report they have received complaints.

++ 38 percent of participating employees say that they have been affected by gender-related pay disparity, but only 2 percent of owners say they have received complaints.

The WJA’s Gender Equality Project, which is funded in part by a JCK Industry Fund grant, plans to act on these findings.

The organization has several has several projects already under way and will debut others, including increased and improved training and materials to both employers and employees.

And the organization also plans to provide training on negotiation and self-advocacy skills—a direct response to the 30 precent of surveyed individuals who said they have been “deprived of equal opportunities for advancement” and the 38 percent who claimed they’ve been affected by gender-based pay disparity.