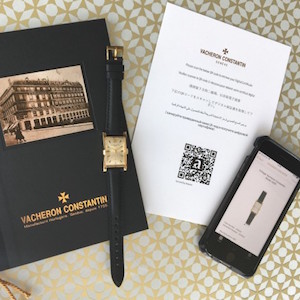 Vacheron Constantin is now selling certain watches with a blockchain-backed “digital certificate,” which is meant to guarantee the item’s authenticity and combat possible counterfeits, the company said in a statement.

The digital certificate will be provided in addition to the Swiss watchmaker’s traditional paper authentication and can be accessed by a QR code. The digital certificate will create an anonymous link between the owner and Vacheron Constantin, which will let the watch’s owner insure his or her model, declare it lost or stolen, as well as share or prove its ownership, it said.

The certificate will also include enhanced product information and invite the wearer to local events. It will include privacy controls, which will let users opt for anonymity, it said.

These features are detailed in a company video:

The technology, developed by tech platform Arianee, has already been included with watches in Vacheron’s Les Collectionneurs collection since May 15.

Vacheron Constantin chief digital officer Angela Au-Yeung said in a statement that “by securing via blockchain, we can now track our products throughout their life cycle and communicate with their owners without asking them to compromise their anonymity.”

Pierre-Nicolas Hurstel, chief executive officer of Arianee, predicted in the same statement that “digital identities will transform the way we own valuable assets.”

Vacheron Constantin is owned by luxury behemoth Richemont, and its statement indicated that its parent company is also looking at adopting this technology for its other brands. It also said the company wishes to evaluate the possibility of creating a standard protocol for the digital certification of objects that could be used by other luxury companies.