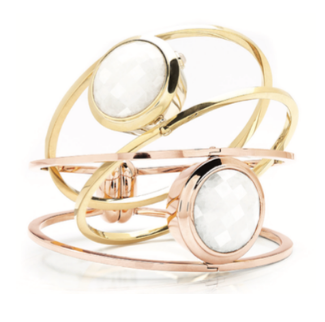 First up will be the pretty Ela smart bracelet

The Richline Group has announced it will launch its own smart jewelry line, Ela, in April.

The jewelry conglomerate, which is a fully owned subsidiary of Berkshire Hathaway Inc., has been in the wearables game for years, having acquired and/or distributed several smart-tech brands and products over the years, including Viawear and the Ungaro smart ring. The company also hosted a memorable wearables exhibit at JCK Las Vegas in 2015.

But Ela marks the company’s first-ever collection under its own shingle. The first release will be the fetching, gold-toned Ela tracker bracelet, which uses low-energy Bluetooth to connect to both iOS and Android devices. The bracelet tracks users’ steps and syncs with the Apple Health app and Google Fit.

And ZDNet reported that the wearable also connects to the Ela app, “through which you can create and share photos and other ‘memories’ like special songs or a voice recording.” The memories “can be preloaded when giving it as a gift to someone else.”

Wearers can also create alerts—which set the round device in the bracelet’s center glowing and vibrating. Users can assign different light colors for certain alerts.

The Ela collection will eventually “extend into multiple product categories like rings and earrings,” according to ZDNet.

“Jewelry is a lot about sharing special moments,” Cliff Ulrich, product innovation manager for the Richline Group, told the outlet. “We wanted to create the modern-day locket and allow people to store memories in their jewelry.… If someone wants all the features in the world, they’ll get a smartwatch. But we tried to create a much more emotional connection with a product, rather than being purely about the functionality.”

The bracelet—which will be available in four different designs—will be priced between $195 and $295.

(Photo of the Ela bracelet courtesy of the Richline Group)