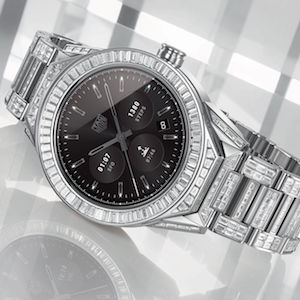 It also runs on the AndroidWear operating system, was developed in association with Intel and Google, and features GPS and an NFC sensor. Plus, it’s water-resistant.

It sells for a cool $180,000—leading TAG Heuer to dub it “the world’s most expensive smartwatch” (which is probably correct).

The watch includes “a unique modularity concept where each component can be easily removed and replaced at will, accordingly to any moods,” says a statement from LVMH-owned TAG.

In a video, Jean-Claude Biver, CEO of the LVMH watch division, explained that when the watch becomes obsolete, it can be switched out for a second model with a mechanical movement.

“You transform the watch into eternity,” he said.

At press time, it wasn’t clear how many of these the Swiss company will actually offer. It is not being sold online. JCK clicked on the “check availability” link and received a pop-up saying we would be notified when it is available. A request for comment was not returned.

While this might be the world’s most expensive smartwatch, it is not the first which aspires to luxury. Earlier this year, Hublot, also owned by LVMH, introduced a 2,000-piece, limited-edition watch for $5,200.  An analyst told Bloomberg it was “a marketing gag.”

Indeed, it is not clear if there is a market for these kinds of bling-drenched gizmos. Most smartwatches are marketed as fitness companions, and it may not be all that fun working out with a $180,000 watch jiggling on your wrist.

Certainly Apple seems to have had second thoughts: In 2016, after a year of hype, it quietly discontinued its $17,000 smartwatch.