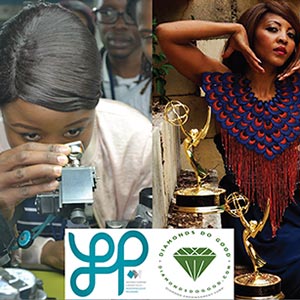 The Diamond Empowerment Fund is helping Botswana youth with formal entrepreneurship training and ambitions through its Diamonds Do Good campaign. “Entrepreneurship has been identified as part of a number of solutions to address unemployment in Botswana,” said the Okavango Diamond Company’s Youth Entrepreneurship Programme managing director Marcus Ter Haar, who is also a board member of the Diamond Empowerment Fund, in a statement. “It is important for us as stakeholders in the industry to do all in our power to ensure the success of the country in which we do business and the people that live there.”

Research shows that 75 percent of consumers say they are more likely to purchase a diamond if the industry gives back. Diamonds Do Good will hold a gala in Las Vegas on May 31, with honorees Bruce Cleaver, CEO of De Beers, and Canada’s Government of the Northwest Territories.

De Beers has a new global campaign dubbed “When Only Forever Will Do,” based on three real clients and their stories. In the campaign, each of the clients explains what the jewels they’ve purchased represent to them personally.

Maria, who has roots in fashion, chose a yellow diamond solitaire ring. “It was there looking at me,” she says in a video. Yumi, who wears the De Beers Talisman Bravery Medal, explains, “When I’m wearing my bravery pendant I feel confident.” And Chinese actress Fan Bingbing wears many pieces, including a diamond necklace. “If a woman’s heart is a diamond, her life experiences are the polishing,” she says.

In other news about the company, De Beers recently bowed a new store in Centria Mall in Riyadh, Saudi Arabia, its first in the region. The diamond purveyor also opened two stores in Moscow, a flagship on Petrovka Street and an intimate location at Vremena Goda Mall. “We are thrilled to offer our passionate and peerless diamond mastery to our discerning clients in Saudi and Russia,” said Francois Delage, CEO of De Beers Diamond Jewellers. 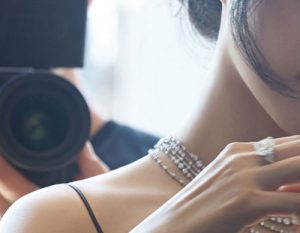 De Beers’ campaign “When Only Forever Will Do”

The Independent Jewelers Organization (IJO) held its conference and buying show at the Marriott Marquis Hotel and Convention Center in Houston in March and raised more than $350,000 for charities, including Make-A-Wish, First Candle, Paws for Patriots, Cure Autism Now, St. Jude Children’s Research Hospital, and the Houston Food Bank.

“The Houston area was devastated by Hurricane Harvey, and the Houston Food Bank was strained beyond its limits,” said IJO president and CEO Jeff Roberts. “We
felt the devastation was not limited just to the city of Houston itself but all the outlying
areas as well, and by choosing this particular charity it would have a more far-reaching
effect.”  IJO’s donation will help provide 54,000 meals for those in need.

Renaissance Jewellery Limited, based in Mumbai, India, recorded a 28 percent jump in sales to $215.4 million for the nine months ending Dec. 31, 2017, compared to the same period a year earlier.  Profits leaped 55.1 percent to $8.8 million.

“The company’s strategy of acquiring businesses complementary to its product and client portfolio has helped in accelerating the growth, ” said Sumit Shah, vice chairman of Renaissance Jewellery, in a press statement. “The robust growth during the current year has been possible by the seamless integration of the manufacturing unit acquired in Dubai in November 2016.”