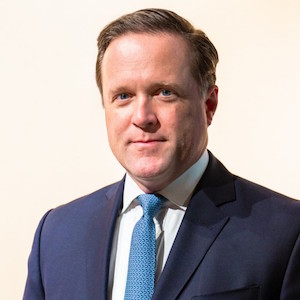 He succeeds Thomas A. “Tad” Smith, who has headed the New York City–based auction house since 2015.  Smith got the job following a protracted proxy battle that ousted longtime chairman William Ruprecht.

Stewart has a connection to Sotheby’s new owner, French-Israeli businessman Patrick Drahi, who bought the company this year in a $3.7 billion deal. In addition to Sotheby’s, Drahi owns various media and telecom companies, including Altice USA, the internet service provider formerly known as Optimum.

Stewart has served as Altice USA’s copresident and chief financial officer since 2016. In 2017, he took the company public in a $2.1 billion initial public offering (IPO) on the New York Stock Exchange. That was considered the largest telecom IPO in 15 years.

Prior to that, he served as head of Itaú BBA International, the European platform of Banco Itaú, Latin America’s largest corporate investment bank. Before that, he spent 19 years at Morgan Stanley as an investment banker. He has worked in London, Brazil, and New York City.

After he steps down, Smith will become a shareholder of the company and act as an adviser to Stewart.

Drahi purchased the auction house shortly after its 275th anniversary, taking it private and ending its 31 years as a private company,

Drahi said in a statement, “Charlie is a talented executive who brings years of international experience to Sotheby’s. I have known him for many years and have been impressed by his appetite for innovation, taking smart risks, and challenging the status quo. He has a proven record of driving growth and is ideally positioned to create value for Sotheby’s clients and our outstanding team. “