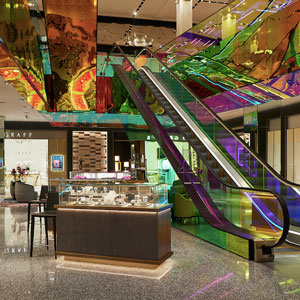 Yesterday, Saks Fifth Avenue officially opened the doors of its Vault—a new department carved into the basement of its 5th Avenue flagship dedicated entirely to luxury jewelry and watches.

The creation of the Vault is part of the retailer’s ongoing $250 million “grand renovation” of its iconic flagship. The newly created department more than doubles the store’s previously existing space dedicated to fine jewelry and watches.

Shoppers access the Vault via a Rem Koolhaas–designed escalator that connects it with the main floor, lower level, and second floor. Once downstairs, they’re surrounded by design flourishes that conjure opulent 1920s-era bank interiors: stacked “gold” metal bars; hefty, vault-like doors; and other accents that play off the space’s bank vault theme.

The Repossi shop is the first U.S. shop for the French jeweler. And Baume & Mercier’s space is the first vendor-designed shop to open in North America for the brand. Throughout the space, around 25 jewelry brands are represented, including four—Assael, Dena Kemp, Nini, and Tabbah—that are exclusive to Saks in New York.

Tiffany & Co.—another brand synonymous with luxury in New York City—is the first company to present in the department’s exhibition space, an area designed to exhibit noteworthy jewels and watches. Currently on display: a collection of white and colored diamonds and rare colored gemstones from the jeweler, including 16 ct. diamond earrings, a 6 ct. fancy vivid yellow diamond ring, and a 14 ct. sapphire necklace set in diamonds.

There are also two VIP private shopping rooms and a lounge and a service area (dubbed the International Lounge), which offer shoppers access to multilingual concierge service, daily store tours, and jewelry and watch repairs.

The new Vault, which was collaboratively designed by Saks’ store planning and design team and architecture firm Gensler, is actually the second Vault for Saks—the first opened in Connecticut in 2017 as a stand-alone store. But the NYC space represents an expanded and updated version of the concept.

“The opening of the Vault is a major milestone in the ‘grand renovation’ of our flagship store,” Tracy Margolies, chief merchant of Saks Fifth Avenue, told JCK. “We see significant potential in the jewelry and watch categories, and we’ve created a luxury destination that provides our customers with world-class service and a remarkable assortment of brands from around the world.”

Top: Inside the Vault at Saks (all photos by Justin Bridges, courtesy of Saks Fifth Avenue)