Blue taxicabs. Blue subway passes. And even blue coffee carts. Holly Golightly would think she had died and gone to heaven.

On May 1, Tiffany & Co. began bathing select parts of Manhattan in its signature hue of robin’s-egg blue.

Cabs parked outside Tiffany and Co.’s famed Fifth Avenue flagship that have been painted in the jeweler’s signature color (photo by Daniel Arnold)

Tiffany even covered a local bodega in its trademark blue hue, which sells paper flowers. (Real paper flowers, not the Tiffany-rendered version.) 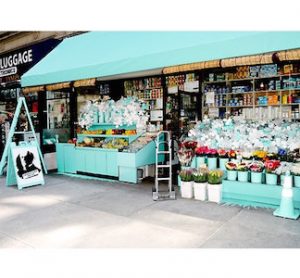 In addition, on May 3, a group of performers clad in—what else?—robin’s egg-blue danced in front of the brand New York City flagship to the retailer’s first recording, a remixed version of Henry Mancini’s Moon River, the theme to the 1961 classic Breakfast at Tiffany’s. The performance was broadcast on Facebook Live.