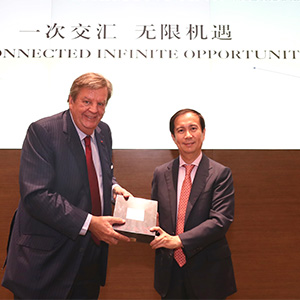 Talk about an odd couple: Richemont, the owner of Cartier and Van Cleef & Arpels, is forming a strategic partnership with Alibaba, the Chinese mega marketplace sometimes criticized for hosting counterfeits and dodgy listings.

The new venture—which will be controlled 51 percent by Richemont, 49 percent by Alibaba—will also launch Net-a-Porter and Mr Porter stores on Alibaba’s Tmall Luxury Pavilion, the site’s platform for high-end brands.

In August, Tiffany also announced it would sell on the Luxury Pavilion.

In a statement, Alibaba Group CEO Daniel Zhang cited stats estimating that by 2025, Chinese consumers will comprise about half of the world’s luxury market.

According to Bloomberg, Richemont chairman Johann Rupert told journalists in a conference call: “There’s not a luxury-goods company in the world that can catch up with where Alibaba is at. We simply don’t have the tools…. I don’t think there’s any doubt in anybody’s mind that the new luxury and new shopping experience will be in a different form.”

Rupert also told Financial Times that he wasn’t worried about Alibaba’s rep as a haven for counterfeits. Just three years ago, rival luxury conglomerate Kering sued Alibaba for, in its words, “encouraging” listings of counterfeit watches. That suit was later settled, and the two companies agreed to work together to fight fakes on the site.

“We have looked at [Alibaba’s] systems,” he said, “and what they have done to combat counterfeiting, and I am satisfied that this is a very, very, very low-risk scenario.”

This is just one of a number of recent moves Richemont has made in the digital realm. In June, it bought Watchfinder, a pre-owned watch site.