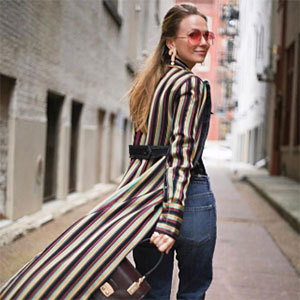 Subscription fashion company Rent the Runway is teaming up with Nordstrom to make it even easier for subscribers to return rented clothes, jewelry, and accessories. The company will install drop-off boxes in four Nordstrom locations in Los Angeles this week.

Rent the Runway debuted drop-off boxes last year, installing them in urban WeWork locations. The new boxes will be set up inside Nordstrom’s store at The Grove shopping center and within Nordstrom Local stores (the retailer’s small-format units) on Melrose Avenue, in Brentwood, and in downtown Los Angeles.

The boxes allow customers to cycle through rentals faster. At each drop-off box location, there’s a scanner where users “check in” their items and have the option of instantly ordering new ones. The company told Reuters that since launching the drop-off box service in WeWork locations in October, it’s seen an increase of more than 180% in returns directly from customers.

Rent the Runway users normally return items through the mail, which makes for slow turnaround times (that is, if you consider a few days slow).

Subscription fashion, which once upon a time was considered radical and even unviable, is seeing so much success (Rent the Runway is valued at $1 billion) that major retailers including American Eagle, Urban Outfitters, and Ann Taylor are getting in on the rental action. And young consumers, who generally have less spending power than that of generations past, have warmed to the idea of renting as a way to boost their closets and environments (see this New York Times article on the trend).

Top: An image from Rent the Runway’s Instagram feed (via: @renttherunway)