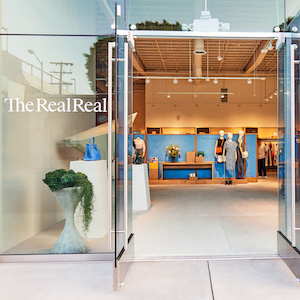 The success of The RealReal—the world’s biggest retailer of pre-owned luxury fashion, jewelry, and accessories—has always relied on a solemn pact between the company and its consumers: Whether you’re buying a Gucci jacket or Van Cleef & Arpels necklace, the product you’re purchasing is genuine and authenticated by experts.

But the clicks-and-bricks company, which launched in 2011 and went public in June of this year, has been battling a rising tide of criticism over alleged counterfeit goods that have been listed as authenticated designer merchandise (read JCK news editor Rob Bates’ report on how The RealReal has been contending with this).

CNBC first reported on the company’s authentication procedures, now in question, revealing that under-trained copywriters with demanding posting quotas were left to authenticate a significant portion of mid-tier merchandise. The day of that reporting, Nov. 5, The RealReal’s stock plunged by nearly 11%, taking more than $202 million off its market value.

RealReal CEO Julie Wainwright has always contended that no fakes existed on the site—but in an email sent to customers after the article was published, she wrote: “we strive for perfection, but we may not be perfect every single time.”

In light of internal RealReal documents CNBC procured and reported on this morning, that may be an understatement.

The 227-page document was sent to copywriters at the company’s warehouse in Brisbane, Calif., according to CNBC, and details listings of fakes from the first and third quarters of 2019.

Photos show examples of faux designer merchandise and their listings. In the report were Louis Vuitton slides in a style that was never created, a Valentino scarf that was labeled “Made in China” instead of the correct “Made in Italy,” and Ugg boots marked with the wrong logo and bow, according to CNBC.

Update: A RealReal representative emailed JCK saying many of the items on the report “were never items that made it to our site.” And contended that, “The RealReal has the most rigorous authentication process in the marketplace. We are the only resale company in the world that authenticates every item we sell across a variety of categories. There is no other resale company doing more to identify and remove fakes from the market. Our confidential training materials help us keep counterfeits off the market. It’s disappointing that CNBC would choose to undermine our efforts by tipping counterfeiters off to how we identify their fakes.”

The company holds “ongoing daily and weekly training sessions, some of which include examining counterfeits” as “a key component in our effort to stay one step ahead of counterfeiters.” The statement added that “products featured are not, as CNBC inaccurately stated, just from returns.”