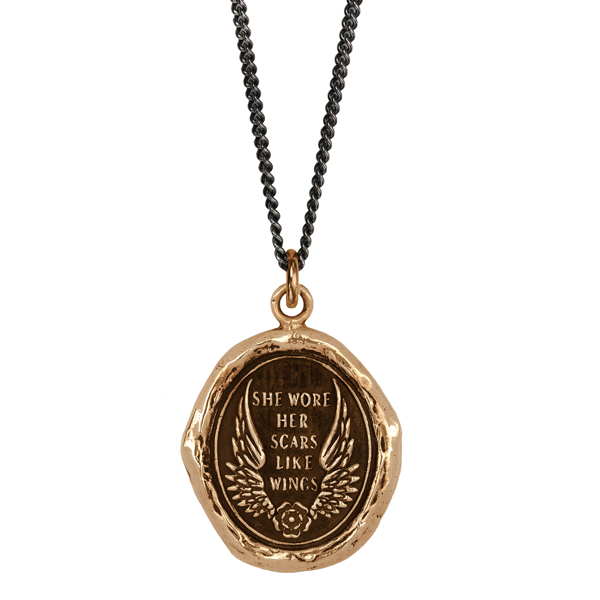 We talk a lot about social media here on JCK, and, while it can be an incredibly useful tool for your business, it can also have a huge impact on the individual—sometimes good, sometimes not so good.

So Danielle Wilmore and Wade Papin, the couple behind Pyrrha, have released a necklace geared toward addressing the negative impacts of social media, specifically on teens and young adults, using the words of modern poet Atticus.

Imagine that you are a young person constantly being hit with images of what society has deemed beautiful and not seeing yourself in those images. This used to be a problem limited to magazines and billboard advertisements—now, it’s practically inescapable.

Teens and young adults are especially vulnerable to acquiring self-image issues through social media and other sources, though these problems aren’t limited only to those age groups.

You may often see guides to self-love and self-care on the internet, either from your favorite bloggers or even your local newspaper. A common point on those lists: taking breaks from social media. For younger generations who have grown up with nothing but social, though, how can that be easy?

“She conquered her demons and wore her scars like wings,” writes Atticus, a Canadian poet whose true identity remains anonymous. This creator of short-form poetry—who has amassed 1.2 million followers on Instagram—has just released his third collection of works, a feat that Pyrrha is celebrating with the release of its talisman pendant, inscribed with the words, “She wore her scars like wings.”

A beautiful sentiment perhaps, but Pyrrha is doing more than peddling a piece of sterling silver—$50 from the sale of each pendant (it retails for $189) will be donated to Love Is Louder, a program cofounded by actress Brittany Snow in partnership with The Jed Foundation and MTV. The foundation seeks to combat bullying, discrimination, and the harmful effects of social media through community and campus programs for teens and young adults.

For Pyrrha, the sentiment of Atticus’ poem seemed a good match for its aesthetic. “Pyrrha celebrates the inherent beauty of imperfection—we embrace the cracks and flaws in the wax seals that give our jewelry unique character,” said Papin in a statement. “There’s a strong synergy between our brand ethos and these words written by Atticus, and we hope the sentiment will resonate with women around the world. Our first Atticus collaboration raised almost $35,000 for charity, and we’re looking forward to bringing funding and awareness to another worthy cause.”

The pendant is available in sterling silver and bronze. Visit Pyrrha.com to learn more.

Top: She Wore Her Scars Like Wings pendant in bronze, $189