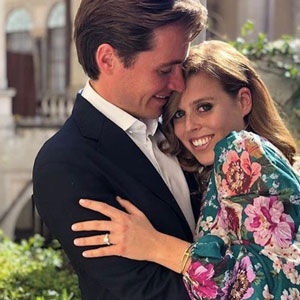 Buckle up for another royal wedding! Princess Beatrice is engaged to boyfriend Edoardo Mapelli Mozzi, the British royal family announced on Twitter this morning.

And, as was the case with Princess Eugenie’s engagement last year, there’s a really good ring involved.

The jewelry designer later posted the above photo of the ring on Instagram, with the note: “I am so honored Edoardo chose to work with me to design the engagement ring for Princess Beatrice and to have been involved in this special moment in their lives. The bespoke experience was a beautiful journey; from imagining the design with Edoardo to the crafting of the finished rings. Being able to incorporate both Edoardo and Princess Beatrice’s characters into the design has resulted in a unique ring that represents their love and lives entwining.”

The couple has been dating for roughly a year, and the engagement took place while they were weekending in Italy. The couple will tie the knot in 2020. Princess Beatrice is the Queen’s granddaughter and ninth in line to the British throne.

“Unlike Kate and Eugenie, who were given colored gemstones, Edoardo has gone for a more modern engagement ring with a diamond, like Harry gave to Meghan,” Kormind adds. “But while Meghan was given a cushion-cut diamond, an older but more trendy diamond shape, Beatrice has been given the most popular and brightest diamond—a round—accompanied by a pair of tapered baguettes, which creates a very Art Deco look, which is very on-trend.”