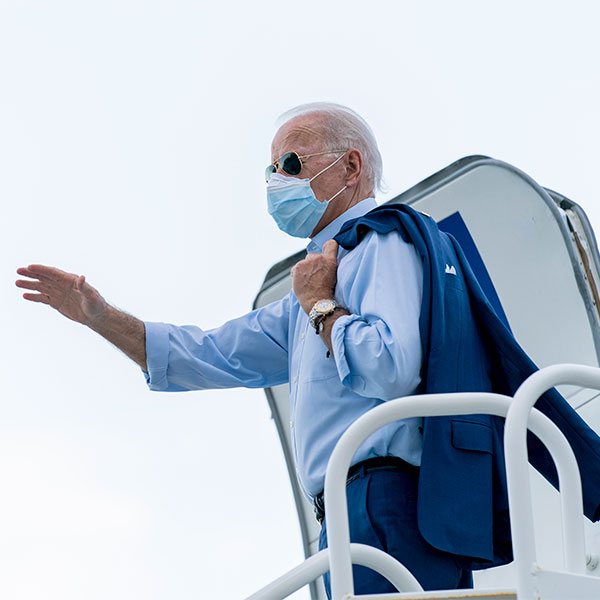 The watch in question: a Rolex Datejust with a stainless steel Jubilee bracelet.

Internet watch sleuths first spotted it just days ago, and if ever there were a “special occasion timepiece” befitting an American president, one who has spent most of his life in prestigious government roles, this surely would be it.

The Rolex is one of a handful of timepieces President Joe Biden has been wearing of late, according to Chrono24, a leading digital marketplace for luxury watches. The company’s specialists have been on the case, as it were, following his wrist through the final stages of the campaign and his multiple televised appearances as the nation’s president-elect. Their research has surfaced five favorites, all of them distinguished and classically presidential in their own way.

“President Biden’s proclivity for Omega is a choice that feels quite aligned with his character,” says Chrono24 CEO Tim Stracke. “He’s a personal fan of both the Speedmaster Professional and the Seamaster Diver 300mm. Both have a lot of the same qualities Americans (and people around the world) are looking for in leadership right now: They are reliable, utilitarian, not overly flashy.”

“In my opinion, the Speedmaster Professional shows Biden’s appreciation of history and innovation,” says Stracke. “This is the same Omega watch that Buzz Aldrin wore on the moon. It’s a steadfast, tried-and-true choice for a president who embodies those similar characteristics.”

President Biden was seen wearing two versions of the Omega Seamster Diver 300M during the 2020 campaign (both are pictured below), including the blue-on-blue James Bond edition.

Throughout his vice presidency (2008–2016), it was the Tissot T-Touch in stainless steel with a black rubber strap.

And for his new role—and a momentous new era—it’s fitting that he has a new watch of the highest order. Wearing it today hopefully signals first of many wise decisions.

But we’re also a fan of the good ol’ Seiko he is wearing in the image up top.

Top: A shot of President Joe Biden descending an aircraft during his 2020 campaign, masked up and wearing what looks to be the Seiko 7T32-6M90 Chronograph—inexpensive at only a few hundred dollars, but stalwart. He also wore it on the occasion of his first appearance as president-elect. Here it is on Etsy, as Chrono 24 only has it in black. (Photo: Andrew Harnik/Associated Press)