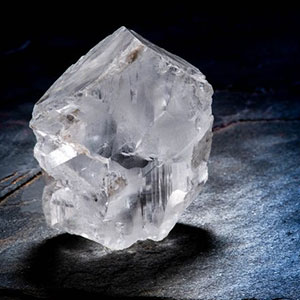 Petra Diamonds has sold the 424.89 ct. diamond (pictured) it found at its Cullinan diamond mine earlier this year to Stargems Group and Choron (Belgium) for just under $15 million.

The diamond, christened the Legacy of the Cullinan Diamond Mine, is D color and type IIa.

In a news release, Petra chief executive officer Richard Duffy called it a “significant sale” for the company.

“[It is] an endorsement of the quality not only of the Legacy diamond, but also the Cullinan ore body itself, which is known for its exceptional stones,” he said.

Duffy took over the company in February.

Shailesh Javeri, chairman of Stargems Group, said in the statement that the Cullinan has produced some of the world’s most iconic diamonds, including the Star of Josephine and the Blue Moon. He said he was “honored” to be able to cut and polish this addition to that legacy.

Petra bought the Cullinan mine from De Beers in 2007.