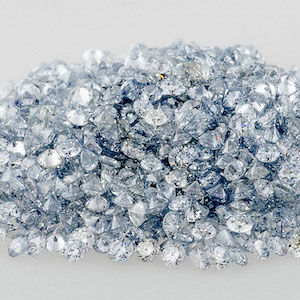 It was an unusual development that had Gemological Institute of America (GIA) scientists scratching their heads. The GIA’s New York City lab recently detected a parcel with more than 1,000 undisclosed pieces of lab-grown melee—which included at least one natural stone.

A GIA lab note chronicling the event pointed out that it is far more common to see lab-grown diamonds sprinkled into parcels of natural melee—a deceptive practice that the trade calls “salting.”

In this instance, the lab received a parcel of 1,102 melee diamonds (pictured, right) with a total weight of 9.67 cts. submitted for its melee analysis service. The melee ranged from 0.98 mm. to 1.52 mm. in diameter. The parcel did not include any notice of the stones’ origin.

The GIA eventually referred 1,093 of those stones for further testing. It found that 1,092 of them were synthetics grown by the HPHT (high-pressure, high-temperature) method. Nine were found to be outside of the GIA’s screening criteria. And one stone was natural.

“It is interesting to note that only one natural was found in this parcel of melee,” said the note. “This has been the largest percentage of undisclosed synthetic melee that GIA has seen.”

The GIA did not offer any theories as to why this had occurred.

But it appears not to be the first time something like this has happened. Last year, lab-grown seller Ada Diamonds complained that it had found several undisclosed mined stones in what was billed as a parcel of lab-growns.

Under the Federal Trade Commission’s guides for the jewelry industry, a retailer selling a man-made diamond must disclose the stone’s origin.

The GIA lab note appeared in the Summer 2018 edition of its journal Gems & Gemology and was authored by Stephanie Persaud, Wuyi Wang, Paul Johnson, and Ivana Petriska Balov.