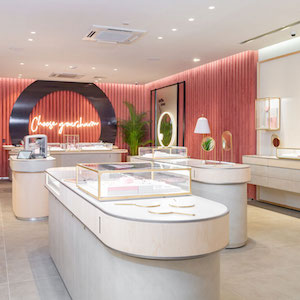 Pandora’s new strategy may be called Programme Now, but any big improvements will come later.

That was the message Pandora gave the market on Jan. 6, when it announced that its fourth-quarter comps fell around 4%, and it expects that its like-for-like sales will continue to fall for all of 2020.

Yet, the charm company hailed those preliminary numbers as good news, noting that while its comps may have dropped, they are at least falling less than they had been. For fiscal 2019, they fell 8%, including a 10% drop in the third quarter. It also noted that organic growth fell 8% for the year, but just 1% for the quarter.

The company attributes this “sequential improvement” to Programme Now, the strategic reset that involves a reinvestment in marketing and promotion.

On the profit side, the company announced that the full-year EBIT margin (excluding restructuring costs) will likely fall in the upper end of its guidance, about 26%–27%.

The preliminary results were in line with Pandora’s previously announced guidance—heartening the analyst community, which expected the company to fall short of its guidance, as it has several times in the past. As a result, its stock rose 12%.

“Many people had expected Pandora to miss that guidance altogether, so a margin in the upper end of the range shows that Pandora has been able to get its costs under control under its turnaround plan,” Per Fogh, an analyst at Sydbank, told Bloomberg.

The brand was re-launched last summer, with a big promotional event that involved painting certain streets of Los Angeles pink, which Pandora has made its signature color.

Last month, the company’s shareholders officially approved Peter Ruzicka as its new chairman. The former CEO of consumer goods company Orkla was nominated for the post in November.

Top: The interior of a newly designed Pandora store (image courtesy of Pandora)