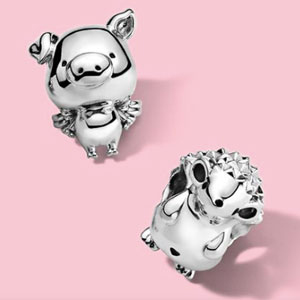 On an Aug. 20 conference call, newly appointed Pandora chief executive officer Alexander Lacik told investors that a planned “major relaunch” for the brand was in the works. This announcement came on the heels of another quarter of declining sales: Comps fell 10% for the brand in the second quarter (though online sales rose 22%).

The global jewelry company hopes to turn its fortunes around by…

++ Introducing a new store design, called Expression, that spotlights the concepts of discovery and collecting. The new store concept will roll out gradually; refurbishing key stores in 2019 is a priority.

++ Establishing a new “visual identity” that spans all channels, online and in-store. The color pink will be its new “main marker and recognizable statement” across all consumer touch points. The brand’s websites debuted the new pink-hued look this morning.

++ Making “the largest marketing investment in the company’s history,” including the introduction of a new logo and monogram.

++ Debuting new online stores and “refresh[ing] its presence” on marketplaces such as Tmall.

++ Introducing a new company tagline: “We give a voice to people’s love—Passions, People & Places.”

Pandora was founded in 1982 in Copenhagen, Denmark, and is sold in more than 100 countries on six continents through more than 7,500 points of sale, including more than 2,700 concept stores.