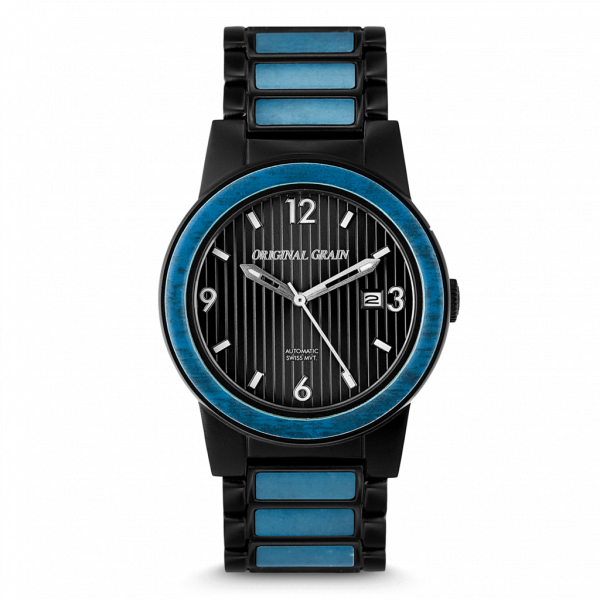 Original Grain, a watch manufacture specializing in designs incorporating wood, wants to put a piece of “The House That Ruth Built” on the wrists of devoted fans. Yesterday the company released the New York Yankees Watch, a timepiece built with wood from Yankee Stadium seats dating back to the team’s fabled 1923 season—their first at the original venue.

The reclaimed material, used as inlay around the face and on a removable stainless steel bracelet (a leather band is also included), is finished in a rich, team-appropriate blue. The watch is officially licensed by Major League Baseball, but is a step up from most of what you’d typically find at the ballpark gift shop.

Fully embracing details that sports memorabilia collectors appreciate—particularly statistics-loving baseball fans—Original Grain limited the run to 2,008 pieces. This not only reflects the seat wood’s scarcity, but also pays tribute to the first Yankee Stadium, which closed in 2008.

Retailing for $1,850 through the company’s website, this special timekeeper dwells well below the luxury watch market, but at the high-middle end of sports collectibles sold outside auction houses. When Original Grain was formed in 2013 using a Kickstarter campaign, their first models could be had for closer to $100. Most of their current collections sell for between $149 and $349 online.

The 1923 Yankees season began with New York Gov. Al Smith throwing out the first pitch with gusto and Babe Ruth beating the Boston Red Sox with a three-run homer. The year ended with the Yankees winning the first of 26 World Series Championships they’d take home while in that building.

Original Grain’s partnership with MLB and the Yankees could also kick off a successful run for the watchmaker, expanding the brand’s market from watch enthusiasts seeking a niche product described as “artisan-made” (a good fit, given that OG’s three founders hail from Oregon) to a broader base of well-heeled sports fans with an appreciation for history and novelty. Whether those fans will make the 500 percent price leap for this piece of the past remains to be seen.