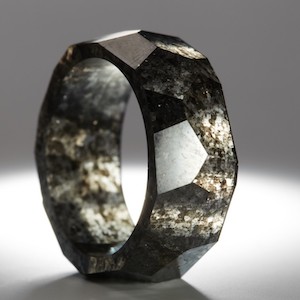 This week, Rapaport News ran an item about an “all-diamond ring,” called the Beaufort (pictured), that had been sent to the Gemological Institute of America’s New York City lab for evaluation.

The 13.15 ct. ring looked like the latest attempt to craft an item made completely out of diamond. It followed two all-diamond rings made from lab-grown material—one from Diamond Foundry, crafted by Apple designers Jony Ive and Marc Newson, and the other from Dutch Diamond Technologies.

For a long time, the first company to try it appeared to be Geneva-based company Shawish in 2011. Now it turns out that this most recent all-diamond ring was probably the first—although its existence has not been publicized until now.

Reid Mackie is an industry veteran who currently works as vice president of marketing for diamonds for Mountain Province, De Beers’ partner in the Gahcho Kué mine in Canada’s Northwest Territories. In 2006, he was working at Rio Tinto and taking a jewelry design program at the Royal Academy of Fine Arts Antwerp at night.

“Our brief was to make a piece of jewelry that had never been done before,” he says.

He decided to create an all-diamond ring, which to his knowledge (and ours) had never been tried before that point. That’s where his day job came in.

“Every mine has unique, untold stories that exist within each production,” he says.

At the Argyle mine in Australia, that was its celebrated pinks. But the Diavik mine also produced a striking material that was usually discarded.

“It was an area of production that was really interesting and usually gets thrown into the industrial side of diamonds and underappreciated. But it wasn’t like any industrial category that I’d ever seen. They were larger stones with a really interesting kind of a bluish-gray color to them.”

The all-diamond ring he created was specially fitted for his wife’s finger, using a 196 ct. piece of blue-gray rough. The process took two years—and required laser technology, then in its infancy. Mackie’s eye for diamonds helped: The material had to be tough enough to be worn. Most industrial material is brittle.

“This was the first pure diamond ring, so we were extra careful,” he says. “We were not sure how the rough diamond would react, so we took things very slowly. Each cut would be followed by the polishing of a facet of the ring and then studying it.”

The final product is quite striking.

“It has a lot of carbonated crystal inclusions. Once we really started to reveal its facets, it looked like it had a storm inside.”

It was christened the Beaufort, after the Beaufort front, a storm that comes to the Northwest Territories every fall and essentially marks the beginning of winter each year.

His wife has worn the ring, but it’s not easy, Mackie admits.

“It’s diamond,” he says. “It scratches things. She ended up scratching one of her favorite glasses at home because of how she held it.”

And because diamond is a great heat conductor, it often reflects the temperature of the room. That means, in Canada, it’s often very cool.

Mostly, she tends to wear it on a chain around her neck. “A lot of times my wife is wearing the biggest diamond in the room. And no one knows it.”

The second question is usually “How can I get one?” Because the material he worked with is so rare, Mackie doesn’t believe it could ever be a mass-produced item.

“It would be very difficult to commercialize. It’s definitely one-of-a-kind.”

Which is something he’s proud of­—and he believes holds an opportunity for diamond miners.

For instance, Gahcho Kué produces a lot of diamonds with fluorescence. His company hopes to introduce a brand that would tie that feature in to Canada’s famed aurora borealis (also known as the northern lights).

“As more companies get involved and productions come into less traditional hands, more interesting ideas will come forward,” he says. “When you look at diamonds with a more artistic eye, you get a different idea of what is possible.

“The ring designed by Jony Ive very much looks like something that comes out of a lab. That speaks to where it comes from. It will have its own fans for that reason. In the case of the Beaufort ring, it is ancient. It is surprising. When you get up close, you see all the carbon spots and everything inside of it. It’s something that is very old, it’s been formed by nature. There’s going to be discerning collectors that know that it is very difficult to reproduce something like this. They’re going to appreciate that they will have something that no one else has.”

The industry’s challenge going forward, he says, is making sure more consumers understand that.

“Post-pandemic, people will have a whole new sense of sensibilities and priorities. People are reconnecting with nature in a big way because they’re not traveling. That forces them to take a look at things that are nearby.

“That represents an opportunity for the natural diamond business. People are purchasing things that have meaning, and natural diamonds can fit into that. Going forward, producers will hopefully be able to find unique products that allow people to express themselves in unique ways.”