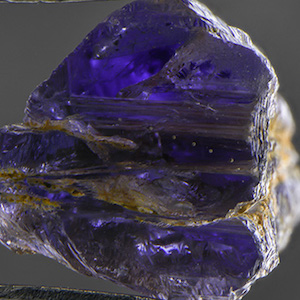 A recently discovered species of mineral will be named after John Koivula, the veteran GIA researcher and gemologist.

A 1.16 ct. crystal of the new mineral—now christened johnkoivulaite—was found in the Mogok Valley of Myanmar by local gemologist Nay Myo. It was confirmed as a new mineral species by the GIA and California Institute of Technology, and subsequently accepted as one by the International Mineralogical Association.

The mineral has a hexagonal crystal structure, similar to beryl and other members of the beryl group, such as pezzottaite. It has one unique quality: It changes colors, from deep violet (pictured, top) to nearly colorless, when observed with polarized light.

A specimen of the new mineral now resides in the GIA museum collection, located at its Carlsbad, Calif., headquarters.

Koivula, the mineral’s namesake, has more than 40 years of industry experience in research and photomicrography. In 1986, he coauthored the first of three volumes of Photoatlas of Inclusions in Gemstones, with Edward J. Gübelin. His other books include The Microworld of Diamonds, released in 2000, and Geologica, written with Robert Coenraads.

He has also won the American Gem Society’s Robert M. Shipley award in 1996, the Accredited Gemologist Association’s Antonio C. Bonanno Award for Excellence in Gemology in 2002, and the GIA’s Richard T. Liddicoat Award for Distinguished Achievement in 2010.

He was also a writer and technical consultant for the television series MacGyver.

“We are privileged to be able to name this mineral after John Koivula who has contributed so much to science and the gem and jewelry industry as a prominent gemologist and innovator in photomicrography,” said Tom Moses, executive vice president and chief laboratory and research officer, in a statement.

In 2018, GIA discovered another new mineral, which it named crowningshieldite, after another renowned GIA researcher, the late G. Robert Crowningshield.