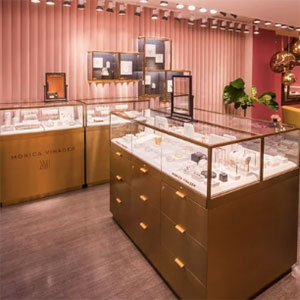 U.K.-based jewelry brand Monica Vinader has opened a boutique on Madison Avenue—its second ever in the U.S.—as part of a strategy designed to grow the label’s presence Stateside.

In 2016, the company launched its first U.S. store in New York City’s SoHo neighborhood, at 151 Spring St., after recognizing a consumer base in downtown NYC through its website.

“When Monica decided to expand the brand’s footprint in New York, we again looked at e-commerce patterns and identified a strong client base on the Upper East Side,” according to a press representative for the brand.

Brand founder Monica Vinader’s attachment to New York is also sentimental. As a child, she stayed at the Carlyle when she traveled to the city with her family. As a result, “she knew that she wanted a store on Madison Avenue near the iconic hotel,” reads a press statement from the company. “The brand found the perfect retail space a few doors down from the Carlyle facade, right in the triangle between the Mark, Carlyle, and Surrey hotels.”

The brand is known for its same-day engraving, done at engraving stations in both its stores and shop-in-shops. About 25% of the brand’s collection is engravable, reports WWD, and messages can be engraved on the inside and outside of pieces.

This November, a Monica Vinader engraving station will debut at at Nordstrom’s “highly anticipated” women’s flagship on 57th Street, the outlet further reports. The Madison Avenue store will also offer a few exclusives—a series of full-diamond pieces, part of its Nura collection.

The company debuted in 2008 and has shop-in-shops at Harrods, Liberty, and Selfridges, as well as six freestanding boutiques in London (with a seventh on the way).