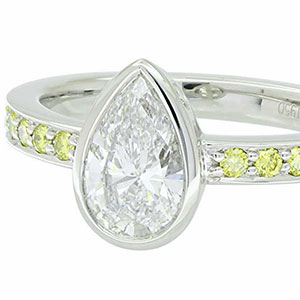 It can be confusing figuring out what’s happening to the price of lab-grown diamonds. On Dec. 21, a Reuters report quoted analyst Paul Zimnisky as saying lab diamond prices had softened considerably. Perhaps not coincidentally, the same day that story appeared, Diamond Foundry announced it was raising prices by an average of 15 percent.

Among some in the traditional industry, it’s an article of faith that, as the manufacturing technology improves, the stones’ prices will decrease. They feel it’s the pattern of history. One jeweler told me he remembered when cubic zirconia was $800 per ct. An Element Six exec said he’s seen the price of industrial synthetics drop markedly. And then there’s lab-grown colored stones: The lowest-price lab sapphires cost less than $100. Created gems are, like created diamonds, chemically the same as their mined counterparts. But their values are very different. And just last week, new company Plasmability made its public debut, claiming a cheaper, more environmentally friendly growing method.

And yet, a counter scenario is also imaginable, in which lab-grown prices will stay steady as demand keeps up. Unlike CZ, there is real money behind lab-grown (including De Beers’). In addition, the natural diamond industry has a bad image, and, perhaps most importantly, the supply of mined diamonds will almost certainly dwindle in years to come. Lab-grown could fill that void.

As resale value remains a key sticking point for many jewelers, growers are extremely sensitive to any suggestion that their product is losing value, in a way people in the natural sphere aren’t. Natural diamond prices fluctuate now, while they rarely went down in the cartel days. But the industry has grown to accept that and understands that different shapes and categories and sizes are subject to different forces. That also appears to be true of the created market: According to Eric Franklin, president of D.Nea, who has been in the lab-grown game for at least a decade, the best way to look at the lab-grown market is to consider it several markets.

Smaller-size diamonds are often produced by Chinese companies. “The Chinese really dominate the melee market,” Franklin says. “It just isn’t cost-effective to do it outside of China.”

But the margins on those diamonds have become squeezed.

“The smaller diamonds, the very little ones…that are on the side of the ring, those have come down, and I think they’ve hit marginal cost,” said Alexander Weindling, CEO of Clean Origin, on Yahoo Finance.

Some might blame—or even credit—De Beers’ Lightbox brand for this, as it prices lab-growns at $800 per ct. (though that includes both total weight and solitaires). But that brand hasn’t appeared on the market in big numbers. “Even before Lightbox,” Franklin says, “anything under a carat has already been real slow.”

Another issue: Small diamonds from about one to 30 points aren’t readily available, due to a quirk of the technology.

“One-pointers can be grown with small cubic presses,” Franklin says. “They get one-pointers and maybe halves and two-pointers. Anything bigger is hard to find. You are either growing big grit or big graded stones. There is not a lot of incentive to grow a lot of five-pointers or 10-pointers. I would suspect that anything [lab-grown] below 50 points is generally polishing scraps.”

The lack of these stones has put some companies in a bit of an awkward position, considering how they often vilify mined product. According to its terms and conditions, lab-grown and simulant seller MiaDonna uses natural stones for gems under 20 points:

The technology used to make the Diamond Hybrid® [simulant] and Man-Made Diamonds does not allow us the ability to create stones smaller than a 0.25 ct. at this time. We are constantly researching and continually working on developing this technology.

While it would perhaps be more transparent to display that information more prominently, it’s likely that many of its competitors are doing the same thing—and not informing consumers at all.

Franklin thinks companies might do this because of “a logistical supply chain issue. They buy semi-mounts from Stuller or Overnight and they are preset with the mounted diamond.”

But the prices for goods of 1 ct. and up has firmed, particularly as more stones are given on consignment. Though, as with natural diamonds, lab-grown pricing can be opaque and tricky.

Prior to the recent boom, some admit prices had eroded. Diamond Foundry, which once said it was selling its products “at a higher level” than naturals, now wholesales larger goods for 55 percent below the Rapaport Diamond Report list, which, by its calculations, is around 30 percent below the natural price. A competitor was wholesaling lab-growns at that price level two years ago.

Ben Hakman, founder of Diamond DNA Solutions and a consultant on lab-grown, believes that prices are the strongest for untreated “as-grown” diamonds, which command a premium, even though it’s not clear whether there’s a legal obligation to disclose treatments in lab-grown diamonds. (There is in naturals.) But this isn’t a legal issue; some of the treated material shows a brownish and grayish tinge.

“The consumers are not stupid,” he says. “They shop around. They want to see stones. You don’t have to be a genius to see a stone is brown under the light.”

Meanwhile, the established companies are increasingly concentrating their energy on the higher end. WD Lab Grown, Diamond Foundry, IIA Technologies in Singapore, and the new venture from former mining exec Patrick Evans all aim to produce rough that will finish out to 1 ct. polished and above, says Franklin. That’s because selling larger lab-growns can be hugely profitable.

The reason for this points out a key difference between the two sectors. Natural diamond prices increase exponentially with size, as larger diamonds are harder to find in the ground. A recent ABN Amro report noted that improved mining technology has made bigger gems perhaps a little more common than in the past. But that remains the general rule.

In the created sphere, different forces are at play. If a factory wants to produce more 2-caraters, it can. And yet those 2 ct. diamonds are priced based on the mined price list, giving companies the incentive to produce bigger stones, because as size increases, so does potential profit.

“Aside from the greater energy it takes to run the machine and increased time, the fixed costs [of growing bigger stones] are basically the same,” Franklin says. “You can still sell a 2- to 3-carat at a huge [retail] discount to the mined diamond, and you get thousands of dollars in profits.”

“If they could upgrade their cubic presses, it would pose a threat to all existing presses,” he says. “It’s a big ask, but it’s technically possible. I’ve seen it done. It’s just a matter of time until the Chinese find out how to upgrade their presses and they flood the market with cheaper big-quality goods at Lightbox prices. It’s a matter of when, not if. But people have been saying ‘when’ for a lot of years.”

There is a parallel to the natural market here. In the 1980s, India began cutting cheaper goods. But as their expertise grew, almost all cutting began to gravitate there. New York City and Israel faded away as traditional cutting centers.

Now, some of these producers may argue that they have a better-looking product (NYC cutters once made that argument), and they also have access to more eco-friendly energy. But if Chinese companies produce noticeably cheaper goods, will consumers care? Most lab diamonds aren’t branded or traced.

The second is, while the lab-grown market is clearly poised for further expansion, we don’t know how much it will grow. We’re also entering a possibly choppy economic year. Diamond Foundry plans to produce 900,000 more cts. in 2019. WD Lab Grown is also ramping up production. And that’s not counting all the producers that are flying under the radar.

For now, some retailers say they have more orders than product and growers report strong demand. Yet that could be the ripple effect at play.

In the diamond business, the ripple effect is sometimes sparked when there’s a perceived  shortage. The market spins into a frenzy, bidding up rough prices and hiking demand for rough in an amount that far outpaces consumer desire on the ground. That might be happening here. A lot of companies want to enter this sector and see man-mades as a way to keep their factories humming.

“It’s almost the next gold rush, the new money-making thing. Everyone says, ‘I need to get into it,’ ” Franklin says. “You have companies stuffing their stones into as many retailers on memo as possible. But I don’t know how much the U.S. market can support.”

But the ripple effect works both ways. After the market overheats, it can reverse itself, and prices overcompensate on the downside.

And of course, more entrants equals more commoditization and more margin pressure. As in the natural business, differentiated brands will likely have a leg up. But not many have made themselves stand out. Having now surfed dozens of lab-grown websites, I’m struck by how similar they all sound. It’s the same notes over and over. They talk about “eco-friendly.” The ruling from the Federal Trade Commission. How they are “real.” They mention problems in mining—though only diamond mining. (They don’t mention issues in gold.)

Some lab-grown companies are working to build real brands: Lightbox, Âme, ALTR. But most aren’t, and undifferentiated products are vulnerable to price shopping , especially if a big dog like Blue Nile, Signet, or Walmart enters the fray. Jewelry Exchange is already saying its stones sell for less than Lightbox’s.

“There will be a lot more entrants, and after that, a lot more consolidation,” says Franklin. “A lot of the growth seems on the supply side, rather than the demand side. I’d rather have a hundred consumers at my door than a hundred wholesalers trying to sell me goods.”

In the end, it will all come down to how the diamonds look, Hakman says, as it usually does. “If people want to ramp up, good luck. But if the goods aren’t salable, they aren’t salable. Some companies are sitting on huge piles of [brownish] goods.”

The lab-grown boom has been exciting and unpredictable. I don’t think anyone really knows where it’s headed. It could be a cultured pearl–type situation, where the upstart comes to dominate. Or it could end up like lab-grown gemstones, which have found a comfortable but nonthreatening low-end niche. There will likely be a few more twists and turns to come. For now, the only thing clear is: The lab-grown market looks more like the natural business than we ever imagined.