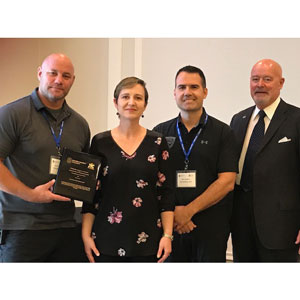 The conference was attended by more than 160 law enforcement professionals who were there to see a series of presentations on various kinds of criminal activity.

Along with several police officers, Scott Guginsky (a retired NYPD detective and now vice president of Jewelers’ Security Alliance) gave an overview of criminal activity against jewelers in the United States, with an emphasis on organized crime gangs from South America that have made their way into Canada.

Retired Royal Canadian Mounted Police (RCMP) officer Kelly Ross, who is also a gemologist, spoke about the criminal use of jewelry. Ross’s 23 years with the RCMP led him to investigate hundreds of criminal cases involving diamonds, gemstones, and precious metals while training hundreds of police officers on the criminal uses of jewelry.

Joel Lessard of the Montreal Police provided an initiative leading to a bylaw change for pawnbrokers, making them obligated to law enforcement about disclosure and retention of property.

In addition, JVC and Jewelers Mutual Insurance Group awarded the York Regional Police with the Law Enforcement Award of Merit, created to recognize and distinguish law enforcement individuals making outstanding achievements in the fight against crime perpetuated toward the jewelry community.

The York Regional Police force was honored for its part in an extensive six-month investigation that identified the criminals responsible for a violent jewelry store robbery in Markham, Ontario, in December 2018. Not only did the police identify those responsible, but it arrested 11 people and further found those individuals to be involved in other criminal activities, such as human trafficking.

“It has been a privilege for the Canadian Jewellers Association and JVC to participate with Peel Regional Police in their efforts to understand and share information about crimes against jewelers,” said JVC in a statement. “JVC’s ability to sponsor such an important conference is due directly to the grant from the JCK Industry Fund.”