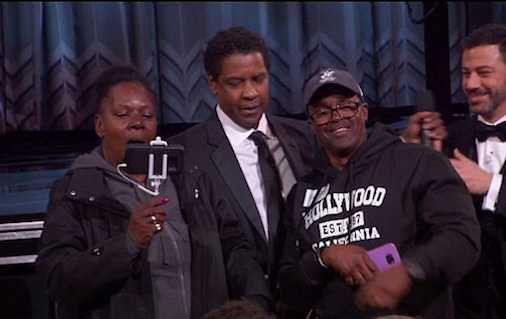 But will Gary’s checkered past put an end to the public affection?

Chicago-based jewelry retailer Rogers & Hollands issued a press release on Monday claiming that it “wants to give America’s favorite Oscars attendees, ‘Gary From Chicago’ and his fiancée,” Vickie Vines, wedding bands for their impending nuptials.

Gary Alan Coe and Vines were part of the tourist group that was rerouted to the front row of the Dolby Theatre by Oscars host Jimmy Kimmel during the awards show Sunday night.

Coe, with his cell phone pointed in the faces of Hollywood’s biggest stars, became the breakout “star” of the pack when he riffed with Kimmel and Denzel Washington. Coe kissed the hands of actresses Nicole Kidman, Octavia Spencer, and Meryl Streep. And Jennifer Aniston gave Vickie sunglasses from her purse as a “wedding gift.”

The hashtag #GaryFromChicago quickly took off on Twitter and other social sites, and invites for Coe started rolling in: The Chicago Bulls tweeted, “Gary from Chicago! We’ve got you covered if you want to come to a game! #Oscars.”

“Like all of America, we fell in love with ‘Gary From Chicago,’ ” read Rogers & Hollands’ statement.

But the invites and gift offers will likely come to an abrupt end today, considering the news The Daily Mail broke on Coe this morning.

Coe had revealed in an ABC7 Chicago interview yesterday that he was released from prison just three days before accidentally attending the Oscars. Coe told the outlet he served 20 years for multiple felonies; he met his fiancée, Vines, and became religious, while in prison.

The Daily Mail did some digging and discovered that one of those felonies is attempted rape, for which Coe, 59, is now registered as a sex offender. He was jailed in October 1994 and spent over two decades in a correctional facility in Bakersfield, Calif.

This is not to say that Coe is not genuinely reformed, and doesn’t deserve the chance to lead a productive life after serving time. But it does throw a shadow over the funny-in-a-squirmy-way Oscar bit, which many already took issue with.

Over at The Atlantic, writer Spencer Kornhaber wrote that “regular folks were treated patronizingly, expected to react with gratitude and awe at the mere fact of breathing the same air as famous people. Kimmel seemed a little too insistent that the tourists be wowed, and an awkward image was set when Gary started kissing actresses’ hands: He wanted to do it, but it looked a lot like royalty receiving a supplicant.”

But in at least a few Facebook posts linking to Kornhaber’s article, a recurrent comment went something like, “Let’s not read too much into it—it was funny!”