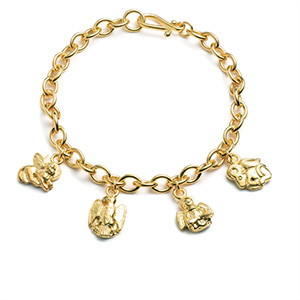 The glitzy Met Gala is over. Which means it’s time for us regular humans to see and experience the Metropolitan Museum of Art’s sublime new exhibition, “Heavenly Bodies: Fashion and the Catholic Imagination”—and possibly pick up a glittering memento from the show.

The temptation to leave with a pricey trinket is real. The museum’s Met Store has commissioned an incredible co-branded collection of fine jewelry from master goldsmith and private jeweler Donna Distefano that bowed alongside the exhibition itself. The collection is currently for sale in the Met Store and on its website.

The Heavenly Bodies jewelry collection includes fine silver, vermeil, and real gold pieces that both interpret and draw inspiration from antiquities in the exhibition.

For Distefano, the show’s theme felt wholly familiar. The Italian-American designer was part of the high-fashion scene while living in Rome in the ’80s, where she became known for her bold, religious-themed jewelry (she once made a wearable rosary for Madonna). And before launching her own atelier in New York City, she worked as a senior goldsmith in the basement workshop of the Metropolitan Museum of Art, creating sellable reproductions of pieces in the Met’s vast collection.

I chatted with the veteran goldsmith on the phone yesterday to find out more about her Met collection and her journey as an artist. We spoke at length, so this interview is condensed.

JCK: How did you come to be the designer-maker for the Heavenly Bodies jewelry collection?

Donna Distefano: I had always been interested and drawn to my cultural heritage, including Vatican treasures. And in my early 20s I started a business and found my designs in places like Saks and Patricia Field, who were picking up these giant Maltese crosses, big bold cuffs, and other [styles].

Even back then they were very bold and celestial and gold and colorful—not such a departure from what I’m doing now.

I left the museum in 1994, when I saw things were going more mass-manufacturing. But things started to shift again around 2014–2016, and friends in the museum started saying, ‘Hey, why don’t you reach out to people in the Met Store.’ I reached out, and I would say it was 2016 that we started having conversations and meetings.

I sent out renderings based on spin-offs of pieces that the museum owned—like an Egyptian chain or a Renaissance ring. We started slowly…the whole time I wholeheartedly was pushing high-karat gold and fine jewelry. I feel the museum has the influence to reach the connoisseurs and collectors of beautifully handcrafted jewelry. 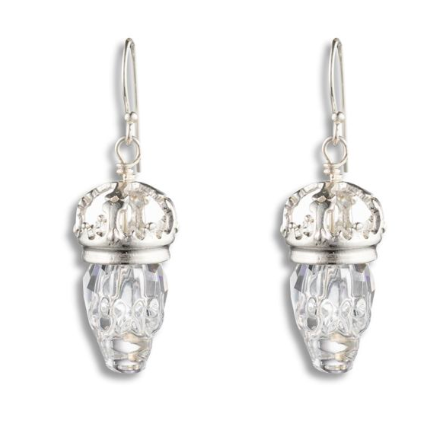 Why would you say this exhibition theme—and it’s content—is an ideal fit for you?

The Etruscans, Ancient Rome, and the Rennaissance have always influenced my work. My husband has worked for the Met for 30 years, so I knew the exhibition was happening, and I realized, ‘Oh, this is more of what I do.’ I had so much to show them already. I didn’t have to go far, I basically just had to pull up old JPEGs. They immediately loved the rosary beads I had made years ago. 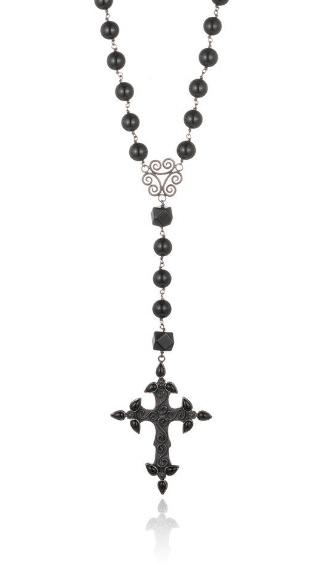 There are four different rosary beads in the collection—tell me a little about them.

Those are four original designs, not designs pulled from the museum. They’re exclusive to the Met Store. They [comprise] the Hail Holy Queen collection—one of four collections within the Heavenly Bodies collection. The rosary is a meditation. My grandmother wore rosary beads until she was in her ’90s. I think they’re great talismans to hold or to wear.

The Mystical Rose rosary is very sentimental to me—it has rose quartz to represent the mystical rose, which is another way of describing the Blessed Mother. The Brother Sun, Sister Moon rosary is based on a poem by St. Francis of Assisi. It’s [an interpretation] of a rosary I crafted by hand in 1990.

Tell me about the other three collections.

The heron bird is the larger collection’s co-branding symbol. It’s a bird that in Ancient Rome was considered a bird of divination.

How do you feel the collection—and the exhibition itself—turned out?

When I heard about the exhibition, I had a sense they would do an extraordinary job, and they really did. It’s sincere, and it’s sublime.

Personally, I sort of stayed true to what I do on a regular basis and presented what’s near and dear to my heart. It was up to me to reinterpret what I’d already done, and that’s what I did. This opportunity was interesting and fabulous.