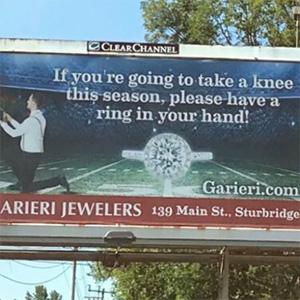 The Massachusetts jewelry retail store responsible for a controversial billboard last year that read, “Make her speechless for a change,” is now catching heat for a new billboard that references NFL players taking a knee in protest of police brutality aimed at black Americans.

The new billboard from Garieri Jewelers reads, “If you’re going to take a knee this season, please have a ring in your hand!” and shows a young couple in the midst of a proposal, with a football field in the background.

The billboard, captured by drivers who have pulled over to photograph it, has gone semi-viral on social media and has garnered both support and vitriol online.

Scott Garieri, owner of Garieri Jewelers in Sturbridge, Mass., says he and his daughter, store manager Alexandria Garieri, intentionally create billboards that spark a dialogue—and shy away from “pure vanilla” ads that are easily ignored.

“We wanted to kind of make it funny, make it catchy,” Scott tells JCK. “Never did I think it would offend anyone.”

But when pressed, the jeweler concedes that he has strong feelings about the NFL players’ protest: “At first I wasn’t going to push any of that,” he says. “But I do not agree with [the protests]. You do not disrespect the flag or the national anthem. If I have to choose who to stand behind, I stand behind our veterans. I’m not disagreeing with their protest—they’re welcome to do that. But I disagree with how they’re doing it.”

“I believe that all lives matter—whether you’re black, white, or pink polka-dot,” he says. “I stand behind police and first responders.”

Scott says the initial feedback to the billboard was largely positive and that sales have followed (“Let’s just say our billboard costs are paid for for the year,” he notes).

But within days, “we were labeled racist, and people started attacking us. We’ve had people say, ‘We hope you go out of business,’ and ‘Bankruptcy is in your future,'” he says, “and giving us a one-star rating on Yelp.”

But the retailer has no plans to take it down. Scott won’t switch it out until December, when he plans to put up a New Year’s themed message.

The jeweler says he’ll take the heat, because all publicity is good publicity. “If someone is calling me a racist, it’s because they don’t know me,” Scott says. “This wasn’t meant to offend. It’s just marketing.”