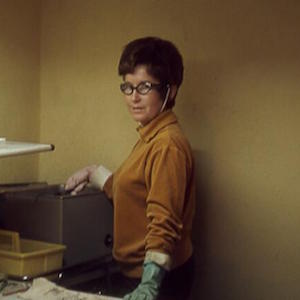 Dorothy “Dot” Wesdorp (pictured), who cofounded jewelry repair service and manufacturer Jewel-Craft in 1950, died on July 15. She was 91.

The company was first established by Dot, her husband Robert (“Bob”), and Bob’s father Earl in Fort Wright, Ky.

“My dad would go around and pick up all the jewelry,” remembered Dot’s son Gary, now the company’s copresident and chief financial officer, in a statement. “He would do the benchwork, and then she would polish it and she would inspect it. So, it was my mom’s job to tell my dad what he was doing wrong.”

Gary said that, despite this, they were married for 70 years.

Mike Martin, who joined the company in 1972 and still works for the company, said in the same statement: “What I remember the most about those days was that when we’d come in to work in the morning, Bob and Dot would already be working, and they’d still be working when we left at the end of the day. This company was grown, not by luck or by someone being in the right place at the right time, but because of the hard work and dedication of Bob and Dot.”

By 1977, the company had grown to 11 employees, and it moved to Crescent Springs, Ky., and began to make a national name for itself.

In 1985, the founders turned management over to their sons Gary and Benet, who now serves as its copresident and chief operating officer.

In 1990, it moved to its current location in Erlanger, Ky.

Three of Gary’s children, as well as all three of Benet’s sons, and Gary’s son-in-law now work at the company.

“Something my grandma always said that stuck with us,” said grandson Ross, “is never forget the people who got us where we are today.”