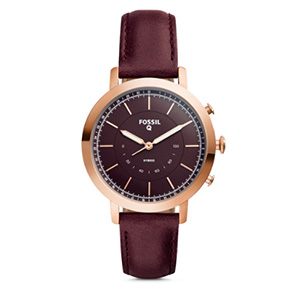 I had the pleasure of visiting with Fossil sales manager Kirsten Warner at the booth, who shared the following about the company’s forthcoming releases:

++ The Fossil brand is releasing a new series of hybrid smartwatches in August, which I was able to see, but not report on, as its specific details are under embargo.

++ The notable releases from Michael Kors are new iterations of the popular Access Sofie smartwatch, which runs on Google’s Android Wear 2.0 operating system and comes in a rainbow of colors, including ones with girly-glittered faces.

++ The playfulness of the smartwatches Fossil’s made for the Kate Spade New York line in the past, said Warner, “will be seen in more of the lines throughout.” Speaking of Spade watches, the new hybrids are ultra-cute: There’s a watch with flamingos that says “Strut Your Stuff”; another with a black-and-white boxer (dog); and, my favorite, a model with a pastel-hue map of the world emblazoned with the words “Going Places.

++ Watches that are all black—and I mean all black, dial and everything—are a trend Fossil’s deployed prominently in its core line. The brand’s called the ebony smartwatches Lunar and Black-Out.

++ Case sizes are shrinking for women at Fossil Group, and everywhere else. The craze for supersize “boyfriend” watches is waning in general, and daintier watch widths are (after a very long absence) rapidly coming into vogue.