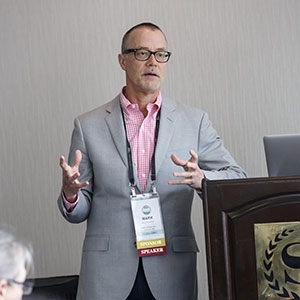 Jewelers of America (JA) introduced elements of its forthcoming consumer marketing campaign to a small group of American Gem Society (AGS) members yesterday, on opening day of the annual AGS Conclave in Seattle.

The campaign, patterned after the iconic “Got Milk” dairy industry campaign, was designed to boost consumers’ interest and affinity in jewelry and ultimately present jewelry as an attractive purchase.

According to JA, 94 percent of retailers and suppliers polled said they felt there was a need for such a campaign.

Mark Smelzer, longtime publisher for JCK magazine and a consultant for JA, shared that JA has chosen Milwaukee-based advertising agency Cramer-Krasselt to build the campaign—and that several things are in place already:

++ The campaign is focusing on self-purchasing females that fall into two distinct demographics: the jewelry enthusiast in her 30s and women in their 20s who are “indifferent” to jewelry.

++ The campaign’s tagline, which will be iterated in various physical and digital spaces, is “Another Piece of Your Story,” referencing the idea (distilled by JA for the audience) that “the right piece doesn’t accessorize you—it becomes a part of who you are.” Self-empowerment is also a theme: Mocked-up ads included one that said, “First be your own rock, then get the ring to match.”

++ The campaign’s website will be yourfinest.com—a phrase that speaks to embracing your finest personal qualities and the finest things you own, Smelzer explained.

++ Much of the imagery in the campaign has yet to be finalized, but presenters gave the crowd a sneak peek of stills from a video that’s been wrapped. The vibe of the models—and the scenarios they were captured in—was casual and joyful, the opposite of the static images that have dominated jewelry advertising for decades.

++ To give the audience an idea of the tone of the campaign, JA shared the script for the video, which begins with: “You had your eye on this for a long time. You finally took the plunge because, frankly, you didn’t have a choice. It was you, as much as your eye color, your laugh, and that scar you got hiking last year.”

The “Another Piece of Your Story” campaign is only partially funded—sponsors include Greenland Ruby, Artistry Ltd., Gemological Institute of America, Silver Promotion Service, Shy Creations, Gumuchian, JCK Industry Fund, Rahaminov, AGS, Gabriel & Co., and Forevermark. JA is hoping to raise another $200,000 from within the industry, with contributions starting at $5,000.

“The reason the ‘Got Milk’ campaign was successful was because everyone was on the same page and using the same message,” said Amanda Gizzi, director of public relations and special events for JA. “If we sit back and wait for someone else to do this, it’s never going to happen. The time is now.”

David Bonaparte, president and CEO of JA, chimed in with a succinct summation of the campaign’s reason for being: “Jewelry is losing marketshare to other categories,” he said. “We have to start somewhere, and I think the more we do this, the more we raise the profile of the category.”