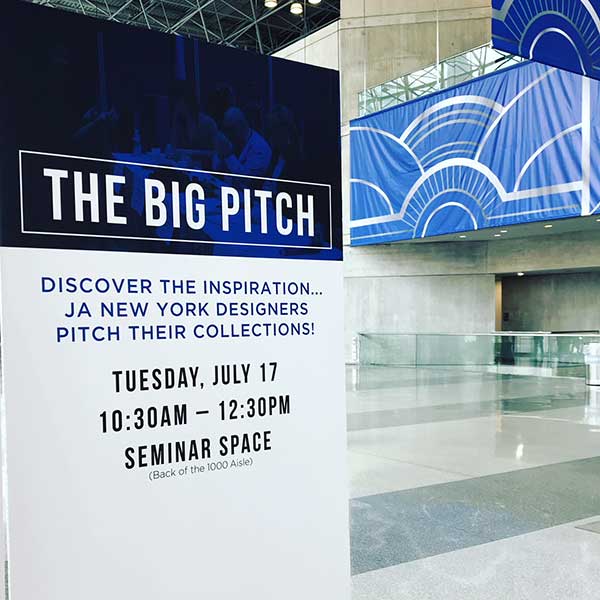 Yesterday morning at the JA New York show, I served as a panelist for “The Big Pitch,” alongside Amy Lane, Fine Jewelry Buyer at Bergdorf Goodman; Jeff Badler, Owner of Maurice Badler; and Jim DeMattei, Owner of ViewPoint Showrooms.

The Big Pitch concept was developed by the late Cindy Edelstein as a way to give emerging designers the opportunity to pitch their lines to a panel of industry experts. It’s conducted in front of a live audience including other artists hoping to benefit from the panelists’ knowledge.

I was there to provide editorial feedback to the nine emerging designers presenting their lines (most were current New Designer Gallery exhibitors or alums).

Many of the names were already familiar to me. In fact, Emily Kuvin and Darśana both appeared in my Mother’s Day gift guide.

I was thrilled to learn that Darśana has just landed at ABC Carpet & Home.

Yesterday’s Big Pitch installment reminded me a little of those Project Runway premiere episodes where the fashion designers wheel in racks of clothes (think: “I don’t see a collection here” and “I think you need to edit” and “I don’t know who your customer is”), except this is the jewelry industry and we panelists largely offered positive feedback and kindly worded, constructive advice.

One panelist encouraged a number of presenting designers to ditch their vermeil offerings because they negatively impacted the overall perception of quality. Another pulled up a designer’s website on his phone to provide comment on the quality of the photographs.

Some designers were advised to pick a lane, or at least find a balance between, designing for customers already on board with their aesthetic and refining or adjusting their offerings to attract retailers catering to a clientele with less specific tastes.

Among the best-received lines was work from Toronto-based Aimée Kennedy, who has a strong alternative bridal voice and exquisite stonework featuring responsibly sourced gems in unusual colors.

The upstate New York line, Merzatta, was praised for the strength of its unique, nature-driven aesthetic represented by its Palm Wing earrings, Pine Cone, and Sea Fan collections.

The ring below, with its shank composed of multiple, movable skinny bands, was identified as an outlier, compellingly so. As such, the advice was to start thinking bigger, beyond the high-end craft show circuit, as a way to draw in a wider audience.

Theresa Kaz, a breakout star from the Spring 2018 edition of JA New York, also jumped on the Big Pitch opportunity and received positive feedback about her line, particularly her fresh, interesting color stories. She also sparked a mini-debate among the panelists about whether having a direct-to-consumer website is a drawback for brick-and-mortar retailers—to the point that it would prevent them from partnering with a designer—or a valuable tool for exposure, with the expectation that consumers are most likely to browse before they visit their local jewelry store in person.