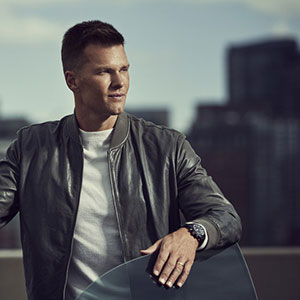 Schaffhausen said that the watch brand and Brady had “exciting projects planned” regarding their partnership, but it didn’t offer any more specifics.

Brady announced the partnership on his Instagram feed on June 25.

I’m excited to officially join the IWC family as I have admired their design and performance for decades! They have an incredible heritage and together we can’t wait to share this new chapter. So many exciting things to come! Maybe I can wear them for my two minute drills this fall. @iwcwatches #IWCPilot #IWCWatches

“I am honored to be partnering with IWC Schaffhausen, a brand I’ve long admired,” said Brady in a statement. “I…look forward to collaborating with their talented team to share the brand’s unique heritage globally.”

According to the statement, Brady has a collection of Schaffhausen watches, among them a Pilot’s Watch Chronograph Top Gun Miramar and the Portugieser Perpetual Calendar.

As quarterback of New England Patriots, Brady has won six Super Bowl titles, four Super Bowl Most Valuable Player Awards, three League Most Valuable Player Awards, and 16 division titles. He is the first player in National Football League history to accumulate 80,000 total yards. He also holds the most game wins of any quarterback, is the all-time leader in passing yards, and has the most career touchdown passes of any player in history.

Christoph Grainger-Herr, chief executive officer of IWC Schaffhausen, said in a statement: “Tom Brady is arguably the best quarterback of all time, but also an admired role model. On the field, his focus is on performance and precision; off the field, he is a true gentleman, incredible father and husband while also embodying elegance and style.”