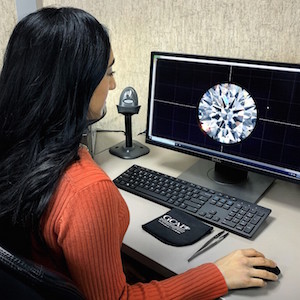 Diamond grading issues have fallen off the industry radar screen, ever since an attempt to litigate the issue ended up a mess, and EGL International—the most controversial lab—went out of business.

Yet, it’s a sad fact that diamonds submitted to different labs still earn different grades—and the potential for consumer misrepresentation is huge.

In September, the International Organization for Standardization (ISO) released what it called “the first internationally recognized diamond-grading standard.”

ISO Standard 24016, which covers “diamond grading, terminology, classification, and test methods,” was developed in collaboration with CIBJO, the World Jewellery Confederation—which, in 2005, published a diamond-grading guidebook that formed the basis for this new one.

The ISO’s new 55-page diamond-grading standard, which contains 15 tables and 94 figures and sells for a not-exactly-cheap price of $194, offers a flurry of specifics on how labs should grade a diamond’s color, clarity, and even cut—though it covers only natural, unmounted, non-treated, non-fancy colored diamonds with weights of 0.25 ct. and up.

Just about all its recommendations have long been part of trade lore, including GIA courses—but the standard also incorporates new guidance, such as how a laser inscription might affect a clarity grade. It does not allow for the traditional one-grade tolerance, a bit of received trade wisdom that allow for labs to be one grade off from each other, particularly in their color grading.

A team of 20 people, representing 22 countries and including “more than 15 diamond experts,” developed the ISO document over two years. The identities of these people, however, is being kept secret, except for Jean-Pierre Chalain, director of the diamond department for Swiss Gemmological Institute (SSEF), and the convener of ISO’s jewelry group, TC 174.

The American National Standards Institute, the U.S. branch of ISO, is not part of ISO’s jewelry group, which is why no U.S. lab, including the GIA, played a role in developing this standard. GIA’s absence is notable since it is not only considered the leading lab in the industry, but it also basically invented modern diamond grading.

Chalain notes the standard will be updated every five years, and that the participation of GIA, or any U.S. lab, in any revamp “is highly desirable and would be welcomed.”

GIA executive vice president and chief laboratory and research officer Tom Moses tells JCK via email: “The first we learned about the ISO document the day before it was announced. We are currently reviewing the document and would hope if there are references to GIA terminology, that the corresponding GIA standard would be applied.”

The standard’s impact on the market is not clear. While ISO standards are influential, they are not legally enforceable, or accepted everywhere. For instance, the Federal Trade Commission’s most recent guidance on lab-grown diamonds differed with the ISO’s on several key points. (In addressing this, the FTC wrote that “many international standards are developed through an industry consensus-building process…and [not] based on protecting consumers.”)

But if a lab voluntarily decides to adopt the ISO diamond grading standards, it can write “graded according to ISO 24016” on its reports. This also requires compliance with ISO’s general laboratory standard, ISO 17025.

A lab can—again, voluntarily—decide to have a third-party accreditor review its diamond-grading procedures to see if it complies with the new ISO standard, and it can also note that on its grading reports.

“In this case, the diamond-grading report will show the ISO 24016 reference and the third-party accreditation logo,” says Chalain whose lab, SSEF, has committed to applying the standard and getting audited. “This is the ultimate proof that the 24016 standard is positively and correctly applied.” (Using the ISO logo is not allowed.)

However, what would seem to be the real ultimate proof of a lab’s fealty to a standard—random spot-checking of the lab’s grades—isn’t yet part of the process.

Angelo Palmieri, chief operating officer of GCAL, one of the few diamond labs to be ISO 17025-certified, says that after reviewing the standard, he “loves” certain elements requiring that each lab disclose the location of where a diamond was graded and that each report carry a unique number. “Who would think that is even necessary to mandate?” he says.

However, he is less enthusiastic about a section that says that a top cut grade can include a table with a 66 percentage. “I challenge you to find a diamond dealer who tells you a round brilliant stone with a 66 table is the pinnacle in diamond cutting,” he says.

He also notes that the standard says that clarity grade should be based solely on visibility.

“While this may not be their intent, it contradicts the training that tens of thousands of GIA students have received, by learning to identify and grade clarity features; such as, size, number, position, nature, and relief (visibility/color) of inclusions,” he says.

Still, he says his lab “applauds any effort that has a primary goal of elevating the standards amongst global diamond-grading laboratories, which is badly needed.”

And so the good news is that, after years of complaints about the lack of a clear diamond-grading standard, a recognized standards group has now put one on paper. Yet, it’s no secret that the broad outlines on how to grade diamonds have been out there for some time. A few labs just chose not to hold to them. We’ll see if they pay more attention now.