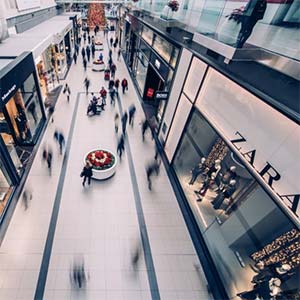 The stock market’s volatility may be giving investors heart palpitations, but on-the-ground retail is having the best holiday season it’s seen in years. At least according to Mastercard SpendingPulse, which tracks spending in stores and online, recording all forms of payment (not just Mastercard payments).

Early data from the company revealed that sales in the U.S. from Nov. 1 through Dec. 24 were up 5.1 percent, to more than $850 billion—and online sales during that same period were up 19.1 percent from 2017.

This good news comes in the midst of a partial U.S. government shutdown, the U.S.-China trade war, deeply fluctuating markets, and concerns that the economy—which has been chugging along nicely since 2010—may soon experience a downturn.

According to Mastercard, the strongest sectors this season include apparel (sales were up 8 percent from last year), and home improvement, which saw a 9 percent increase.

Department stores are still a mixed bag. People don’t seem to want to shop in them—sales at brick-and-mortar department stores were down 1.3 percent Nov. 1–Dec. 24, compared to 2017. But online, sales were up 10.2 percent during the same period.

Amazon is still killing it, of course. The online giant revealed that it shipped 1 billion items over the holidays with its Prime service. (Fun fact: The last Prime Now delivery on Christmas Eve was made at 11:30 p.m. in Berkeley, Calif., and it included a Lego Super Heroes Captain America Building Kit and shampoo).

“In sales terms, this has definitely been a very strong holiday—one of the best since 1999,” Neil Saunders, managing director of research firm GlobalData Retail, told the Los Angeles Times. “Momentum in the consumer economy, confident shoppers, and more discipline from retailers have all helped to boost spending.”

He added, “The main question now is, can retailers keep this performance going as we move into 2019? Investors are very nervous about the prospects, which is why retail stocks have taken a bit of a beating.”