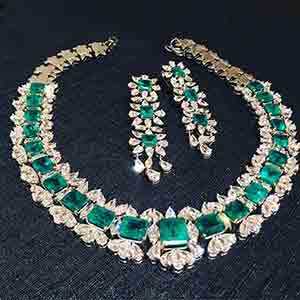 Greetings from the Pink City, the magical capital of Rajasthan! I arrived on Thursday, just in time for Diwali, the Hindu festival of lights, a joyful evening of celebration (think New Year’s Eve meets the Fourth of July) that I was privileged to spend at the City Palace with the royal family of Jaipur.

I have Samir Kasliwal, a ninth-generation member of the family behind Jaipur’s world-famous jeweler-to-the-maharajas, The Gem Palace, to thank for the exclusive invite. The evening, which included fireworks, rooftop terrace drinks with Indian high society, and a brief chat with our elegant hostess, Princess Diya Kumari, was unforgettable. 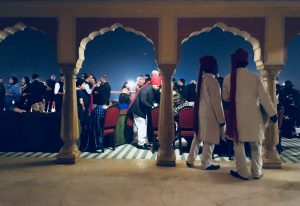 Celebrating Diwali at the City Palace

But it was merely a prelude to my real reason for flying across the world: To attend the International Colored Gemstone Association (ICA) biannual congress, which runs Oct. 21–24 at the Fairmont Jaipur, an enchanting property that resembles a Mughal citadel, located on the northern outskirts of Jaipur.

I participated in the ICA Congress once before, way back in 2006, in Dubai. This year, the organizers invited me to Jaipur to moderate a panel about bloggers featuring Benjamin Guttery of @thirdcoastgems, Katerina Perez of @katerina_perez, and Tracey Ellison, aka @thediamondsgirl. I happily made the 30-hour trek from Los Angeles because I knew the conference would give me an opportunity to catch up on the gem trade’s most pressing issues. Here are the themes that dominated the first day of the event.

There is a compelling case to be made for large-scale mining.

Praveen Pandya, chairman of the Gem and Jewellery Export Promotion Council (GJEPC), set the stage for an industry debate on the nature of gemstone mining in his opening remarks on Sunday morning: “Colored gemstones has been an industry that’s been dominated by families and they have done extremely well taking this industry to center stage,” he said. “But I think there’s a need to introduce more professionalism into this family-owned business and take it to next level, and that will start when we begin operating on a more structured level.”

“Unless we have structured mining, we will not go beyond our present state,” he added.

Pandya ceded the stage to Sean Gilbertson, the new CEO of Gemfields, the gem trade’s best known large-scale miner. Speaking of the company’s Kagem emerald mine in Zambia, he said: “Mining is about scale. If you wish to build a national champion, a world-record beater, it’s got to be big. If it’s artisanal or small scale, it is not, in our opinion, sustainable.”

“Today we have approximately 700 direct employees and 200 employed by contractors working on the operation,” Gilbertson continued. “We move 12 million tons of rock every year. That’s approximately 1 million tons a month, which equals 1,370 tons every hour if you run your operation 24 hours a day, seven days a week, which is what we do at Kagem: We do emerald mining during the day and waste mining during the evening. The operating costs at Kagem are approximately $31 million every year. We’re spending $2.6 million per month or $86,000 a day. When we get there, we don’t know if we’re going to find emeralds or if they’ll be high quality, medium quality, or low quality.”

The effort described above is necessary, Gilbertson said, because gems are incredibly difficult to find, a truism he substantiated with a mind-blowing statistic: “At Kagem, we have to move 5 million units of rock in order to get one unit of emerald,” he said. “I believe the population of Jaipur is 6 million. What that means is you have to see 5 million people walk past you and only one will be an emerald.”

He went on to talk about other benefits of large-scale mining, from tax revenues (unlike Africa’s artisanal miners, Kagem pays them) to health and safety standards that don’t exist at rickety underground mines. And it was tough to disagree, especially when confronted with images of what an artisanal mine looks like (jury-rigged is putting it mildly). Regulation, oversight, legitimacy—aren’t these standards to which all industries should aspire?

And yet the tension at the Congress, between the mechanized mining community epitomized by Gemfields and the stewards and supporters of the artisanal mining community, was made clear by a succession of speakers that followed Gilbertson, many of whom extolled the virtues of small-scale mining—chiefly, the income it brings to poverty-stricken people who have no other means to feed their families.

“The heart of our industry is made by small-scale mining,” said presenter Federico Barlocher, before showing the audience a video of a mine in the Mogok district of Myanmar where workers wielding shovels represented the extent of the mechanization. “They help our industry to grow.”

Gemologist Vincent Pardieu touched on many of the same points in a presentation on the history of Madagascar’s gem deposits. “Madagascar is a country with hundreds of thousands of people on the starving level,” he said. “There’s no way but sapphires for them to make a living.”

This debate has dogged the industry since long before I started writing about color in 2000. Small-scale operators like those in Myanmar, Madagascar, and throughout Africa are not likely to go away—nor do I think the industry should hasten their demise—but by the same token, I agree with Pandya: How will the industry grow when the vast majority of its stones are sourced through such fragmented channels? What happens when colored stone demand in China reaches its full potential? (Indeed, a presenter from China said Chinese demand for colored stones is projected to grow from $10 billion annually to $25 billion in the next few years.)

The gem business is unbelievably volatile.

Here’s the cold, hard truth at the crux of the colored stone trade: No amount of money or geological expertise can guarantee you’ll find a rich deposit of gems (or any deposit, for that matter).

Carlos Emilio Osario, a speaker from Colombia’s emerald mining industry, hammered this point home by sharing an inside joke: “The miner asks the engineer, ‘Which way should I go?’ ‘Go further out,’ replies the engineer. ‘How far should I go out?’ ‘Until you hit emeralds or you run out of money.’”

Gilbertson, too, was very explicit about the unpredictability of gemstone mining. “Not all emeralds are equal,” he said. “We have struggled to get premium emeralds. There’s been a downward trend in the weight we’ve been able to offer at auctions in Lusaka and Singapore. The October 2017 recent auction was our smallest at only 65 kg. As a result of that volatility, our revenue is extremely volatile. It’s feast or famine.”

The next time your clients ask you about the value of your colored stone jewels, you may want to share some of these anecdotes, which convey the extraordinary circumstances under which the world’s finest gems come to market.

Transparency is still a goal, not a reality.

In 2006, I wrote an article for the International Herald Tribune about the gem trade’s efforts to establish an ethical and socially responsible supply chain. Guess what? We’re still grappling with how to make it happen.

That may be because the colored stone industry is a paradox: Intimate, emotional, fascinating, and soulful, it lacks the transactional quality that permeates the diamond trade (allowing diamonds to dominate the marketplace). And yet it’s this unstructured-ness that makes gems so enticing. As an industry, we may never reconcile our conflicting feelings about colored stones. But that doesn’t mean we should stop trying.