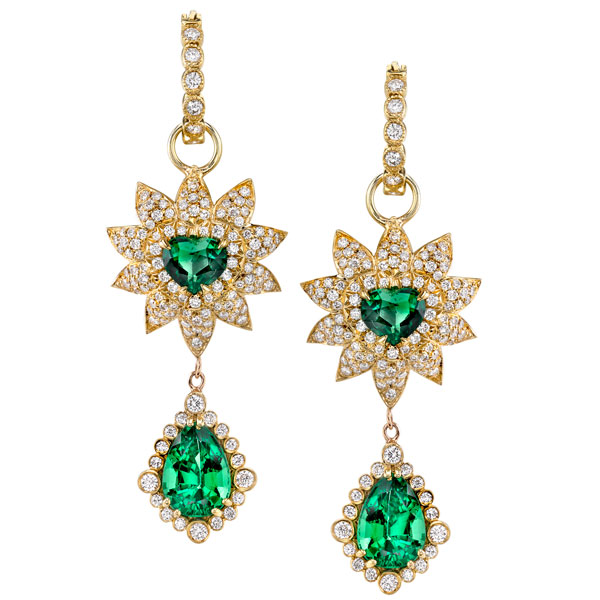 I didn’t go too far out on a limb to make the prediction for this title—green is nearly always a popular color—but I sense a renewed obsession afoot.

Because, if you really think about it, how often do we see a lot of green? Like full-on, head-to-toe chartreuse or eye-catching outerwear in lime?

Okay, so it does happen. But it certainly isn’t seen often enough.

However, according to some of fashion week’s recent runways, we’re in for a treat come spring.

In Paris, Louis Vuitton nailed the green outerwear, in a coat comprising various shades of the color (above). Givenchy was another to offer leathery green, while Balenciaga did a mean green power shoulder. These are only a few examples of how designers played with the color—there was indeed much more.

The dress, and face, that literally launched Google Images. @jlo first wore The Jungle dress by @versace at the 2000 Grammy Awards, which led to so many searches on Google that the company created Google Images. Almost 20 years later, @donatella_versace recreated the iconic design and J.Lo closed the show in the iconic look on the runway in Milan today. Images by @gettyimages, video c/o @versace

If you needed more proof that green is where it’s at, look no further than Milan Fashion Week, which saw Jennifer Lopez reprise her role as red carpet icon: She wore a remake of her infamous Versace jungle print dress from the 2000 Grammy Awards (above). And the internet rejoiced. Armani also offered a noteworthy collection of green, in beautiful silky fabrics and crushed velvet, and on the street, those who came to see and be seen did it in green—and lots of it.

If I can give women the confidence to wear greens and purples, I think it’s great. It makes you feel good, and confident. #VBSS20 x VB

And last but not least, London. Across the pond, Victoria Beckham gave us beautiful, ethereal green—the mind of dress you could wear to work, but also just live in (above). Carolina Herrera had your cool, kiwi-hued bridesmaids dresses, and Christopher Kane went with an absolutely electrifying shade of shocking neon green for his Ecosexual collection.

True, I am being selective—you could pick out a handful of other color trends from this year’s events, such as orange, yellow, or red. But the thing they all seem to have in common is their lack of subtlety: If you’re going to wear it, you wear it.

This isn’t a story of contrasts. This is full-on, matchy-matchy good stuff (incidentally, my autocorrect kept trying to change matchy to matcha, which, in terms of color, works equally as well).

As far is jewelry is concerned, stock the green stuff: jade, peridot, malachite, tourmaline, emerald, tsavorite, chrysoberyl, chrome diopsode, amazonite, and so on. Put them all together in one insane showcase after the holiday season to reinvigorate the energy of your store (we could all use a jolt post-holiday, you know?). Take the green goods you already have in-store, and let some new arrivals—and clever merchandising—shine a new light on them. In January, which often feels like the dead of winter (I suppose it is), don’t underestimate the power of color to inspire, alter a mood, and even lend hope. Green may be a welcome sign of spring, but it’s not too early to harness its power in advance of a new season.