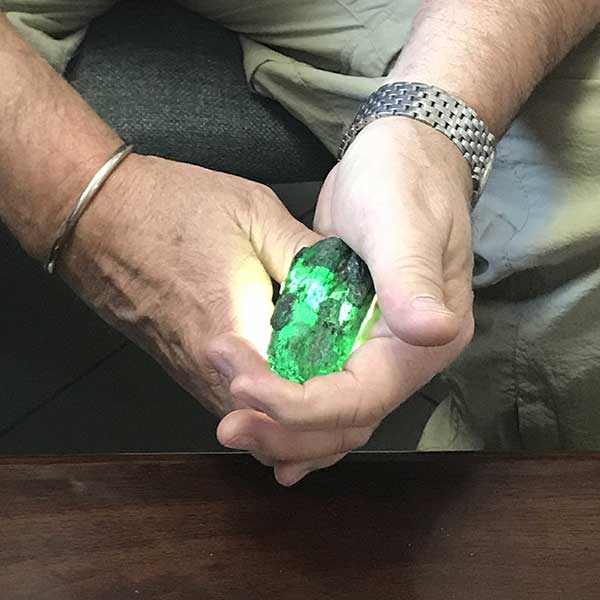 A little over a year ago, I wrote a recap of the 2017 Tucson gem shows in which I singled out the coolest things I’d seen during my week in Arizona. Ethiopian emeralds topped the list.

“There’s no way to tell how big the deposit is, but word on the street is that there’s a steady supply,” I wrote. “The goods are fetching a premium over Zambian emeralds because of their lack of clarity enhancement. And with emerald enjoying renewed popularity in recent years, the East African material, unlikely as it sounds, could turn out to be the next big thing.”

That ambitious prediction, I’m pleased to report, is proving true. “In five years’ time, in 20 years’ time, people are going to be kicking themselves they didn’t buy Ethiopian,” says Simon Watt, of Maysville, Ky.-based Mayer & Watt, the U.S. distributor for emeralds from the Helo deposit near the southern Ethiopian trading town of Shakiso.

“The material is as good if not better than what’s coming out of Muzo,” Watt says, referring to the legendary Colombian emerald mine whose gems were sought after by the maharajas. “Not only is the material exquisite—it has very intense color—but it also has a glow, which Zambian doesn’t have. It’s not as blue as Colombian but it glows like Colombian. It blew everybody’s minds. Apart from the fact that it’s beautiful, 40 percent of our material has no oil, which is unheard of. Less than one-half of 1 percent of Colombian material has no oil. In the whole of the AGTA show, you might find six no-oil Colombian stones if you’re lucky.”

Discovered about two years ago, according to Watt, the Helo deposit is owned by the Bu’a Obsa Association, a tribal group of miners that works with Watt and his business partner in Bangkok to distribute the goods internationally.

Watt had a selection of Shakiso stones on display at his booth in Tucson, and it was fun to watch people react to the pretty emeralds with the unusual origin. Ethiopia is known for its opals, but it’s never been considered a source of emeralds. And that fact alone helps explain why the material is pricing out “at about 40 to 50 percent of Colombian,” Watt says, adding that a 10 ct. gem, no oil, might wholesale for $10,000 to $12,000 per carat.

But you don’t have to take Watt’s word for it. Talk to any dealer familiar with emeralds and chances are good they’ll vouch for the East African finds. I’ve spoken to a handful of people just in the past week who all say that savvy investors would be wise to consider the emeralds from the unlikely source.

The Ethiopian discovery cuts straight to the heart of our industry’s obsession with origin. We’ve seen it in the pricing gulf that separates the top Burma rubies from those found in Mozambique, or the top Kashmir sapphires from look-alike gems mined in Madagascar or Sri Lanka. “Investors and collectors want to buy labels they know will sell, but the savvy investor is always looking for the company that has something new, something special in the marketplace,” Watt says.

While that may sound self-serving coming from a seller of something new and special in the marketplace, I wouldn’t dismiss his passionate remarks about the emeralds from the Horn of Africa. On the contrary, if I had $100,000 lying around, I’d be eyeing seriously a fine Ethiopian 10-carater.