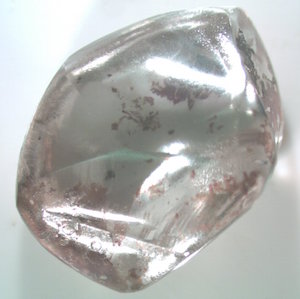 A 71-year-old grandmother from Aurora, Colo., discovered a diamond weighing nearly three carats (pictured) at the Crater of Diamonds State Park in Murfreesboro, Ark.—and did it after only 10 minutes of searching.

It’s the biggest find so far this year at the Crater, which is the only park in the world that lets visitors dig for diamonds—and keep what they find.

The finder, who wishes to remain anonymous, said in a statement that she was visiting the park with her husband, son, and two of her grandkids.

When she first saw the 2.63 ct. stone laying on the surface after 10 minutes of scraping the dirt with a rock, she wasn’t sure if it was a diamond or not, guessing it was a piece of glass. Still, she gave it to her son to put in his pocket and kept searching for another hour.

When the staff at the park’s Diamond Discovery Center told her she’d uncovered the largest find of the year, the woman could only say she was shocked.

Park Interpreter Waymon Cox described the stone as “about the size of a pinto bean and is shaped somewhat like a fingernail. Several brownish, freckle-like marks along the surface give the gem a unique, one-of-a-kind appearance.”

Cox added that one out of every five diamonds found at the park, including several that set records, is found right on top of the ground, since park personnel regularly plow the diamond search area to loosen the soil. He noted that diamonds are a bit heavy for their size and lack static electricity, so dirt doesn’t stick to them; they can sparkle and be easy to see in sunlight.

This finder named her gem Lichtenfels, after her hometown in Germany and a word that means “a rock between two lights.”

JCK editor-in-chief Victoria Gomelsky wrote about her experiences at the Crater of Diamonds here.

Top image courtesy of the Crater of Diamonds State Park