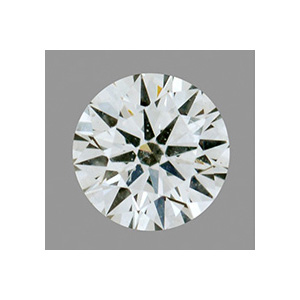 De Beers does not provide grading reports for its Lightbox lab-grown diamonds, leading to much speculation about their quality. A recent evaluation by a Gemological Institute of America (GIA) scientist found that a pair of quarter-carat Lightbox white stones would likely be graded G VS1.

The findings were written up as a Lab Note for GIA’s Winter 2018 Gems & Gemology.

After examining two Lightbox round diamonds intended for a pair of earrings—one at 0.24 ct., the other at 0.26 ct.—research scientist Sally Eaton-Magaña said the cutting on the stones would receive “excellent” and “very good” grades, respectively. The two samples were obtained from a “third-party vendor,” the note said.

Interestingly, the Lightbox logo, laser-inscribed beneath the table facet, knocked down the clarity of both stones, which otherwise would be considered VVS, Eaton-Magaña wrote.

The two stones were grown with the chemical vapor deposition (CVD) method and do not show any traces of post-growth HPHT (high pressure, high temperature) processing. The GIA says that 75 percent of the near-colorless CVD material it has examined has been HPHT treated after growth.

The Lab Note said that, based on Lightbox promotional literature, its pink and blue lab-growns “have an appearance that is unusual among natural-color diamonds and are unlikely to ever be perceived as a natural-color product.” The colorless Lightbox samples are more difficult to distinguish from mined gems but can be identified as CVD-grown by spectroscopic techniques, DiamondView testing, and the internal inscription, it said.

Making this Lab Note somewhat ironic is that GIA does not currently grade man-made diamonds with its standard Four Cs grading scale, opting for “general color and clarity descriptions.” In a 2016 interview with National Jeweler, GIA chief laboratory and research officer Tom Moses said this was the most “logical way” to grade lab-growns. But the difference has meant that the GIA lab-grown reports have gotten little usage from growers.

Now however, the industry’s most famous grading lab says it is weighing changes to those reports.

“GIA will, in the very near future, finalize and announce changes to our reports for laboratory-grown diamonds to align with the FTC Guides and changes in the market,” says spokesperson Stephen Morisseau.

But one seemingly obvious switch would be the title of the reports, which are currently called “Synthetic Diamond Grading Reports.” Growers generally object to the term synthetic, arguing that consumers perceive it as fake. Last summer, the Federal Trade Commission removed synthetic from its list of recommended qualifiers, although it did not prohibit its use. (It did say that the term could not be used to imply that lab-grown diamonds are not actual diamonds.)

GIA’s winter Lab Notes also include a few other unusual lab-grown-related finds, such as a natural stone mistakenly submitted as man-made and an irradiated CVD synthetic that was found in a pile of natural irradiated melee diamonds.