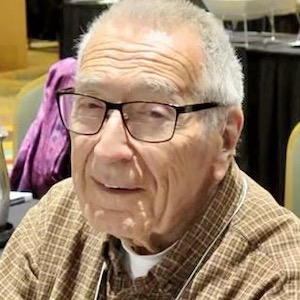 After obtaining a Ph.D. in organic chemistry at the University of Nebraska-Lincoln, Hanneman worked as a research analytical chemist for the DuPont Research Lab, the Standard Oil/Chevron Refinery, and the Kaiser Center for Technology.

But his lifelong hobby was gemology, which he was introduced to as a child by his father.

He decided traditional gemological education was too costly, and dubbed himself the world’s foremost “self-ordained gemologist.”

“He believed that anyone with a keen interest in learning about gems should have that opportunity,” said an obituary from his family. “Convinced he could do better, Bill utilized his insatiable curiosity, analytical mind, and chemistry background to develop and produce his own line of affordable gemological instruments under his name: Hanneman Gemological Instruments.

“The instruments that he invented, practical inexpensive solutions to cost prohibitive alternatives, are still in use worldwide,” the obituary said.

In 1998, Hanneman authored what was considered his signature book, Guide to Affordable Gemology. Two other books, Naming Gem Garnets and Pragmatic Spectroscopy for Gemologists, followed in 2000 and 2011, respectively. His course Diamond Cut Grading Simplified can be viewed on the Canadian Institute of Gemology’s website.

In 2018, he received the Antonio C. Bonanno Award for Excellence in Gemology from the Accredited Gemologists Association (AGA).

“Dr. Hanneman has dedicated decades to providing gemologists with practical solutions to many of gemology’s big challenges,” said AGA president Stuart Robertson at the time. “It would be difficult to think of anyone more deserving of this recognition.”

Hanneman’s comments on the world of gemology were often blunt and to the point. “Every diamond in every jewelry store, under the bright lights of the sales counter, looks good to someone,” he wrote in his cut grading course. “If it is pretty, you like it, and the price is right, buy it.”

Similarly, he wrote to JCK in 2000: “[B]eing synthetic is like being pregnant—one is or one isn’t.”

Hanneman “was so far ahead of his time that the industry did not know what to do with him for many years,” says Robert James, president of the International School of Gemology. “He was an iconoclast that simplified the concept of gem identification and made it more affordable and understandable for so many in the industry.”

He was also an enthusiastic fly fisherman and developed the Common Cents System, a way to objectively measure fishing rods.

Hanneman was predeceased by his wife of 65 years, Margaret; sister Katharine; and two sons-in-law. He is survived by four children, one granddaughter, and three great-grandchildren.

“In keeping with Bill’s wishes, no service is planned,” concluded the family obit. “Join us in raising a glass to toast a life well lived.”