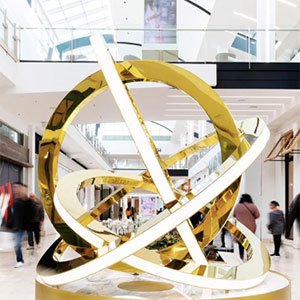 Garden State Plaza shopping center in Paramus, N.J., is morphing into a mall of the future. That is: a mall that offers more than fast fashion and soft pretzels.

The high-performing shopping center, owned by Unibail-Rodamco-Westfield, is at the beginning of a major renovation that will add residences and offices, a hotel, an outdoor park space, and venues specifically designed for fitness and yoga studios.

Such additions are becoming de rigueur in the retail–development game. The evolution of the shopping mall has been on fast-forward since global consumers began flocking to e-commerce more than a decade ago, and online retail behemoths such as Amazon gave rise to a generation of shoppers who rely on the ease and speed of e-comm to purchase everything from clothes and beauty items to drugstore staples and groceries.

The shift has resulted in a consolidation of retail globally—marked by thousands of store closings—that seemingly knows no bottom.

To combat the decline of in-store sales at centers, mall developers have rushed to lease spaces to businesses that offer experiences—kids’ science centers, restaurants, gyms and fitness spots, etc.—instead of things. They’re reasoning that fun and games will keep consumers coming back and, ideally, shopping in between all that dining, goo-making (in the science center!), and rock climbing.

“What people are asking from the mall is much more” than what it was just four years ago, Unibail-Rodamco-Westfield’s U.S. president Jean-Marie Tritant told CNBC in the same article. “People want convenience…to be able to socialize. When you bring additional food and entertainment…what happens is you increase the dwell time.” And more “dwell time” boosts the chances that consumers will spend more.

Unibail-Rodamco-Westfield, a company that formed when European commercial developer Unibail-Rodamco bought Westfield last year, owns and operates 92 retail properties, including Westfield Century City in Los Angeles, and counts Garden State Plaza Mall as one of its most consistently lucrative when it comes to per-square-foot sales.

Work on the Paramus shopping mall is already under way and is scheduled for completion in 2022.