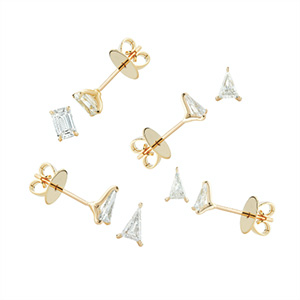 Let’s not mince words: Last week’s revision of the Federal Trade Commission’s (FTC) Jewelry Guides was a massive victory for the lab-grown diamond business—a sector that, ironically, has sometimes disparaged the FTC.

Looking at the statements from the traditional industry following the Guides’ release, some seem almost punch-drunk, as if so taken aback by the slew of adverse rulings they didn’t know which to focus on first. Most noted that the FTC still mandated disclosure of lab-grown diamonds, but that’s hardly a victory: If disclosure wasn’t mandated, you could turn out the lights, because the business would be over.

While the FTC’s lab-grown rulings certainly seem a little one-sided, by and large they are logical and tough to argue with. Yet, even rulings that seem fine on the surface could have unintended consequences.

Take its new rule on lab-grown terminology. In the past the FTC approved only a narrow quartet of terms to describe man-made gems: synthetic, lab-grown, lab-created, and [manufacturer]-created. It has now nixed synthetic—which is fine; that term is arguably confusing, and no company was using it for marketing purposes, anyway. More significantly, the new Guides also opened the door to any term that “clearly and conspicuously convey[s] that the product is not a mined stone.”

That, frankly, is not all that different from how things are run now. The FTC has always looked at the totality of an ad. Even before this ruling, if a marketer used a clear descriptive phrase like non-mined or grown by man or [manufacturer]-grown or man-made, it’s hard to imagine anyone complaining, even though those terms were not on the official FTC list. I mean, it’s possible someone might complain, but I hope people have better things to do with their time.

So if the new guidance is not a big change, what’s the objection? The old rule gave the trade a clear list of what phrases to use and not to use. It doesn’t anymore.

“I don’t get the greater allowance in discretion by manufacturers,” says diamond analyst Paul Zimnisky. “The whole point of the FTC is to make this process more objective and less confusing for consumers. This was not accomplished.”

In theory, the FTC does provide a simple standard: Any verbiage must clearly describe the product. Marketers come up with new lingo all the time, and if they dream up a clever new buzzword that accurately describes a lab diamond, more power to them.

But in practice, while the FTC’s standard sounds easy, it often isn’t—as a decade of arguments over the word cultured demonstrate. It’s when you’re talking about terms favored by growers but hated by the natural business—cultured, cultivated, aboveground, and foundry—that the FTC needs to step in, referee, and offer a clear verdict.

In fact, the Diamond Producers Association is now warning that the more flexible guidance “will require the agency to address a large number of claims on a cumbersome case-by-case basis.”

That is, if it’s willing to. When the Guides were being prepared, the FTC was asked to weigh in on a number of different terms, including foundry, created, and [manufacturer]-grown. However, the agency backed off, saying it didn’t have any “consumer perception evidence”—which it has traditionally been defined as a survey—to make that call. So while the FTC standard seems simple, the agency apparently requires a poll to judge if a company meets it.

Jewelers Vigilance Committee (JVC) president and CEO Tiffany Stevens hopes that, despite the added leeway, most companies will stick with the term lab-grown, which is becoming the industry standard, and it’s better known by consumers.

“Most people on Google are looking for that term,” she says. “If [companies] get too creative with their terms, people are not going to find them.”

In a perfect world, that’s correct. But it also assumes that no players out there want to misrepresent.

That turns out to be the FTC’s assumption as well. “Part of what prompted this is manufacturers aren’t hiding the fact that these are lab-grown diamonds,” FTC attorney Reenah Kim told me last week.

The FTC is typically evidence-based, but it didn’t offer support for that assertion.  And, of course, “not hiding” is not the same standard as “clear and conspicuous disclosure.” I have certainly seen communications that I felt were frustratingly fuzzy.

Beyond that, even if there isn’t misrepresentation today, that doesn’t mean there won’t be tomorrow.  Let’s say Lightbox, as some predict, drives down the price of lab gems. That could make misrepresentation a lot more desirable, not to mention profitable. There are a lot of operations producing diamonds. Some of the overseas companies operate under the radar. They may not all play by the same rules.

Stevens also worries that the current confusion will lead to an increase in what has been a persistent problem: simulants misrepresented as lab-grown diamonds. JVC assistant counsel Maya Owens says this issue is now a large and growing part of the JVC’s mediation practice, even though calling a simulant a diamond has always been—and remains—a deceptive practice under the FTC Guides.

“With the additional confusion and ambiguity in terminology, people might take more advantage,” Stevens says. ‘This puts the lab-grown folks in the role that the natural folks have been in for a while—worried about protecting their product and the consumer being confused.”

The FTC Guides are supposed to—as they say—guide the industry. Unfortunately, its ruling on terminology seems like it’s leaving the landscape a little more unsettled.