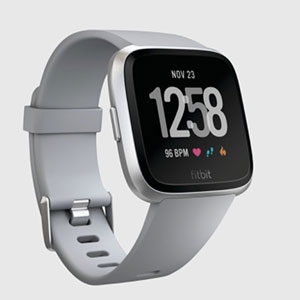 Fitbit is planning to release a brand new smartwatch in the near future with “mass appeal,” said company cofounder and CEO James Park during a call with investors on Feb. 26.

Park’s tease of the new watch was brief, and he didn’t share details or a release date. But news outlet Wareabale has obtained and published photos of the smartwatch (procured from an anonymous source, it says, but the “leak” could just be a planned exclusive).

The smartwatch may be the second iteration of the Fitbit Blaze, which the company has been working on, but could also be something entirely new.

The Ionic, which was conceptualized to compete head-to-head with the Apple Watch, has been a bit of a dud for the San Francisco brand. Together with the Alta HR and the Fitbit Aria 2, the smartwatch accounted for only 36 percent of total revenue for Fitbit in the fourth quarter of 2017.

“According to one source familiar with the company’s plans, who asked to remain anonymous, Fitbit was aware that the Ionic didn’t have mass market appeal,” Wareable reports.

The brand’s also chasing the female consumer with the release, said the source. The Ionic only comes in one size and is fairly bland-looking; this next one should be smaller in size, more like the first Blaze.

The watch will come in four colors—black, silver, rose gold, and charcoal—with a range of strap types and colors. And functionally, it will have the same relative SpO2 sensor that debuted on the Ionic, Wareable reports, but it won’t have a GPS. It will run on the Fitbit OS software the company debuted with the Ionic.

And the smartwatch will certainly be cheaper than the $299 Ionic, as it reaches for that “mass appeal.”