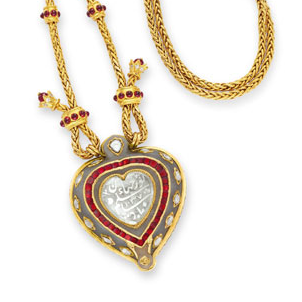 The Elizabeth Taylor Trust and Christie’s are back in court, squabbling over a canceled $8.8 million necklace sale.

In 2011, Christie’s auctioned off the late actress’s extensive jewelry collection, in a much-hyped, record-breaking sale that garnered over $183 million.

One of the lots, however, has proved a problem: The Taj Mahal, a diamond and ruby necklace given to Taylor by then-husband Richard Burton in 1972. The Taj (pictured) fetched $8.8 million at the 2011 sale.

Shortly afterward, its buyer asked for his purchase to be canceled, as the item did not, as he believed, once belong to Mughal emperor Shah Jahan. Christie’s obliged and reversed the sale.

Christie’s then asked the Trust for the sale proceeds back.  But the Trust has so far refused.

In a complaint filed May 11 in New York Supreme Court, the Trust said that the Christie’s catalog never warranted that the Taj Mahal belonged to Shah Jahan, only that it was “Indian.” It says that any other provenance claims were made by Christie’s representatives in public appearances, that “went beyond the language of the catalogue.”

The Trust also claims that Christie’s has failed to remit the proceeds of a $2.9 million Bulgari ring it sold as part of the auction.

Christie’s could not be reached for comment. However, in a prior motion to dismiss, the auction house noted the two parties’ consignment agreement says that, in the event of nonpayment, Christie’s can cancel sales “at [its] sole discretion.”

This is the second time the two parties have legally battled over the Taj Mahal. Prior litigation over the diamond ended December 2015, when the two parties agreed to drop the lawsuit and work together to sell it.