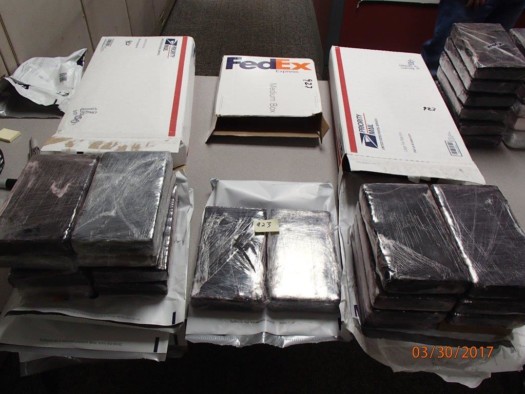 A supposed jewelry business based in New York City’s Diamond District was actually a drug front, according to a release from the New York Drug Enforcement Task Force.

After agents seized the shipment, a man, later identified as Junior Lopez-Pena, was arrested as he attempted to exit the location. Lopez-Pena, 26, of Haverstraw, N.Y., faces charges of criminal possession of a controlled substance in the first and third degrees.

At the business, agents discovered the cocaine as well as a money counter, the release says.

In a statement, special narcotics prosecutor Bridget G. Brennan called the trafficking scheme “brazen,” noting it involved “the delivery of 55 kilograms of cocaine to a bustling commercial center in Midtown Manhattan during broad daylight.”

Lopez-Pena’s attorney told the New York Daily News his client has done nothing wrong. “He simply signed for a package and left,” he said.