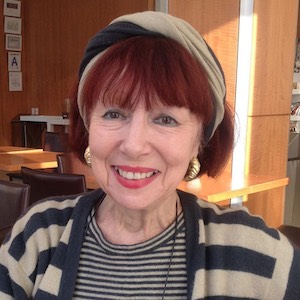 Marilyn F. Cooperman (pictured), a celebrated jewelry designer who also worked in fashion and journalism, died on Aug. 19 at age 83.

Cooperman was born in Toronto. At 20, she went to New Zealand, where she ended up writing and illustrating the New Zealand Herald’s first fashion and beauty column, according to a profile from DKF Estate Jewelry.

In 1963, she came to New York City, where she met legendary designer Fred Leighton, who was then running a downtown clothing boutique that specialized in Mexican wedding dresses. Cooperman worked and designed out of a small studio on his premises.

In the 1970s, she established Max and Marilyn, which sold art deco–inspired clothing to department stores such Saks Fifth Avenue, Bergdorf Goodman, and Bloomingdale’s.

She then went back to publishing, becoming fashion director of Seventeen magazine. Eventually, Simplicity magazine commissioned her to design clothes based on sewing patterns. They were so successful, she became Simplicity’s editor-in-chief. Five years later, she became editor-in-chief of Vogue Patterns.

In 1987, while in her fifties, she made another career change. Fred Leighton, who by then had become a well-known Madison Avenue luxury estate jeweler, asked Cooperman to design jewelry for his store. Though she had no formal jewelry training, she took him up on it, and learned wax casting at the Fashion Institute of Technology.

“Just like you or I would have a drink at the end of the day, she would a sew pair of pants,” says Diana Singer, a colleague and president of the American Society of Jewelry Historians (ASJH). “Fred knew she could make jewelry, because she just had more of an inherent understanding of construction than most people.”

At Leighton, “she would take older larger pieces that were no longer desirable, and she would reinvent them in glorious ways,” Singer says.

In 1994, she launched her own brand, Marilyn F. Cooperman. Her jewelry eventually graced celebrities, political figures, and royalty, and is part of collections at the Museum of Arts and Design, Yale University Museum, and the Museum of Fine Arts, Boston. She was also a longtime member of the ASJH board.

“She was about 5 feet 3 inches [tall], but when she walked into a room, people stopped and looked at her,” says Singer. “She had an extraordinary sense of style and an unusually perceptive eye. Everything about her was artistic—her home, the way she set a table, and the way she prepared food. She was just full of light and life. So was her jewelry.”

An online obituary says: “Her life choices were as rich and multi-faceted as her circle of loved ones and the jewelry she created. Her sublime creativity was equaled by her gift for friendship. Her signatures: multiple bracelets, brilliant red lipstick, champagne diamonds, passionate enthusiasm.”

She is survived by her husband, Frank Schnieders, and three stepdaughters. She was predeceased by her first husband, Alvin Cooperman.

A memorial service is being planned.