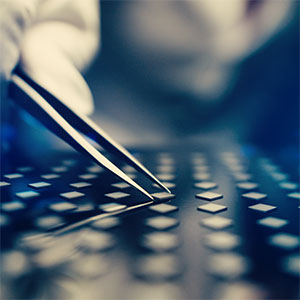 Immediately after De Beers announced it was launching its Lightbox lab-grown diamond line, cutting in some parts of India virtually halted. One person described the shock as “Richter scale, 9.” Sightholders and other producers felt blindsided. Everyone scrambled to figure out what it meant.

At JCK Las Vegas on June 1, the Lightbox team held a lunchtime meeting that seemed to calm down at least some people. Executives explained that they wanted to create a new market, not replace the old one. “We look at this as an additive, rather than a substitutive business,” said Lightbox general manager Steve Coe.

Throughout the lunch and in interviews, De Beers executives, with a few exceptions, didn’t sound all that excited about the new member of the family. They called synthetic diamonds “not rare,” “not precious,” and suitable for “emotionally shallower occasions,” like a Sweet 16 or quinceañera. “Love, commitment, forever,” pronounced executive vice president of corporate affairs David Prager, “are not grown in a lab.” Lightbox is jewelry that, if you lost it at the beach, “you wouldn’t be quite so concerned,” said head of marketing Sally Morrison. It reminded one attendee of The Producers: like executives were deliberately disparaging their own product.

In private conversations, insiders insisted that Lightbox isn’t just a chess move but a real business, noting the money De Beers is investing and the “sweet spot” it’s targeting—the under-$1,000 price point now dominated by handbags and other accessories. Perhaps the best way to look at Lightbox is De Beers steering into a skid. It doesn’t want the car to head this way, but as long as it is, it will aim the wheel in that direction and try to grab control. And De Beers has always been about control. 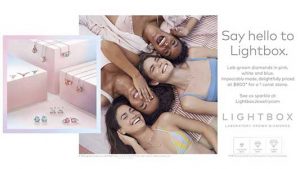 Lightbox’s stones will be created in blue, pink, and white.

So what is De Beers’ objective here? At the JCK show, a former exec told me a fact I’d never heard before: By volume, there is more cubic zirconia sold than diamonds. Yet the diamond industry doesn’t fret about CZ—or moissanite for that matter. They are different products, with different price points.

Those are simulants. Let’s look at lab-created gemstones. You can now buy a man-made sapphire stackable ring for $60 at Jared, which describes lab gemstones using language it would probably not use for lab diamonds. Synthetic gemstones once sparked considerable angst in that industry. Not so much anymore. They are considered a different market.

Man-made diamonds do worry the natural business, for good reason: They are pitched as the same product, to the same customers, at comparable price points. Lightbox is De Beers’ effort to change that positioning, to place the lab-grown market in the same space occupied by created colored stones and moissanite. It can still be a good business, even a booming one. It just won’t be a business miners will have to worry about.

“De Beers Group doesn’t have a problem with laboratory-grown diamonds,” said Prager at the luncheon. “We have a problem with how they are marketed and what that does to the value of diamonds. Our view is the best way to solve that problem is to get out in the marketplace and lead and compete.” Lightbox, he said, “will create clear differentiation in the market for the role of a natural diamond and the role of a laboratory-created diamond.”

Which brings us to pricing. De Beers brags Lightbox prices are “transparent” and keyed to the cost of production, rather than the natural diamond market. What mostly struck competitors is how low they are. All Lightbox stones are sold for $800 per ct. (retail), topping off at 1 ct., a level that dramatically undercuts its rivals. One person whose company sells lab-growns told me he was planning to sell a trade member a 1 ct. man-made for $3,200. After the De Beers announcement, the person called him and said he would pay no more than $800.

Some have pointed out that many Lightbox pieces, including most of the 1 ct. items, were marked as “t.w.” (total weight). That led them to wonder if De Beers was really selling 1 ct. lab-growns for $800, or just a group of smaller stones that equal a carat. Morrison assured me that Lightbox is selling “true one-caraters” in every color, though in just one product: Its solitaire pendant—which, like all Lightbox items, requires the purchase of a mounting ($100 for silver, $200 for gold). 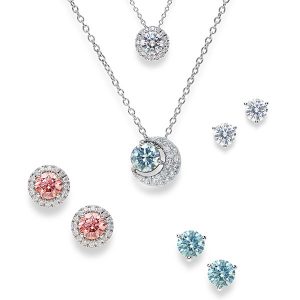 Lab-created diamonds from the Lightbox line. No piece will exceed 1 ct.

Still, uncertainty remains over how many stones Lightbox will sell, what quality they will be—the stones don’t have grading reports—and where they will be sold. (The current plan is to launch direct-to-consumer e-commerce sales  in September, with an “initial retail trial” shortly afterward.) For that reason, people in the lab business told me they were taking a “wait and see” approach toward this new interloper until they understood exactly what De Beers was doing.

From De Beers’ standpoint, the new plan is not without risks. If Lightbox works, it could hurt the market for cheaper fashion-oriented natural diamond jewelry. Small low-quality goods contribute to De Beers’ profits, but play an even larger role in the bottom lines of its mining rivals. That could spark a huge ripple effect.

As I wrote last week, De Beers’ endorsement of synthetic diamonds—as half-hearted as it is—has now raised the product’s profile. I won’t say it has legitimized man-made gems, as they were always legitimate products, but it could prod some people who have been sitting on the fence. As one seller told me, “There’s no reason for a retailer not to buy from us now.” In addition, De Beers is avoiding certain markets. It’s not selling stones larger than 1 ct., nor is it selling bridal, though that’s a big part of the lab business. Rivals may now target those areas, with more cred than before.

During the luncheon, I flashed back to past De Beers announcements. In 2001, when De Beers first opened its retail chain, I wrote: “As with De Beers’ ‘supplier of choice’ initiative announced last July, this new venture is at once revolutionary yet leaves a remarkable amount of the status quo intact.” That also describes what is happening here. De Beers has made a major shift, yet it also wants to keep things mostly as they are.

But look what happened in the past. Those initially measured De Beers changes begat larger ones, partly because of what De Beers set in motion and partly because the outside world was changing as well.

De Beers has a clear strategy here. But even the best plan doesn’t always survive contact with the real world. Lightbox appears well thought out, but it’s also a huge gamble. De Beers has opened a door, it has crossed a Rubicon. There is no going back from what it has done, and no one really knows where this new path will lead.